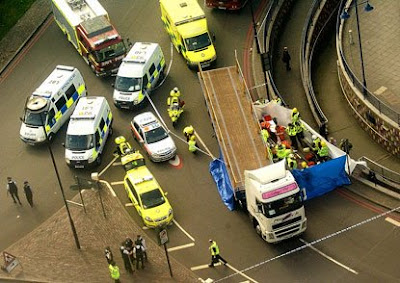 (Above) Wednesday's collision at the Elephant and Castle (pic: Evening Standard)


A CYCLIST died when she was crushed by a cement mixer today (Thursday). The rider - a woman in her 30s - suffered multiple injuries in the crash, which occurred at the junction of Goswell Road and Old Street, Finsbury, at about 9.20am.

She was pronounced dead at the Royal London Hospital in Whitechapel little more than an hour later. Paramedics and firefighters had rushed to the scene in an attempt to save the woman, who was under the lorry's back wheels, but her injuries were too severe.

Mark Cox, 30, manager of Nusa Kitchen in Old Street, said: "There are lots of accidents here. Two weeks ago a motorcycle and a car collided as the car turned left and the bike went straight."

The Goswell Road receptionist said: "Half the time the lights don't work, and even when they do the pedestrian crossing lights sometimes don't work. A few weeks ago, a lady stepped out and she was hit by a motorbike. She is still in hospital. It's also dangerous for cyclists because it's so busy."

Ms Kocak added: "This is the most dangerous junction in London. I have been here two years and I have seen or heard of something every other week."

This happened the day after this fatality on Wednesday:

A CYCLIST was crushed to death in a collision with a lorry in south London. The woman, in her thirties, died at the scene on the Elephant and Castle roundabout at about 3pm yesterday. Witnesses told how the woman became trapped between railings and the near side of the truck as she turned the corner at the same time as the vehicle.

A restaurant worker who saw the accident, and did not want to be named, said: "She tried to come inside the lorry as it was turning. I don't think he saw her at all because she was right at the back. "But she was crushed under the rear wheels. It was an awful sight. She was still conscious at first, but really badly injured and bleeding heavily."

Last year nine cyclists were killed in London by lorry drivers. This year’s total has now reached four, with two killed in the past 48 hours.

BBC London News has ignored both fatalities, just as they have ignored every single instance of a cyclist being crushed by a lorry in 2009 and 2008. Cyclists are usually only regarded as newsworthy when they can be demonised or shown as guilty of an offence; for the BBC journalists who decide what London 'news' is, road violence is of no interest, unlike knife crime or stories about drivers who have received 'unfair' parking tickets. The BBC plays its part in sanitising road violence, by, in common with the rest of the national media, ignoring it altogether, while trying to frighten us all with stories of terrorist threats and youths with knives. In reality, statistically, the greatest threat of violent death or serious injury to the average person in Briton comes, to a massive degree, not from a terrorist or a youth with a knife but from a driver.
Posted by freewheeler at 20:01