I was in the West End yesterday afternoon and I saw this. An electric car, being charged on Wellington Street WC2. 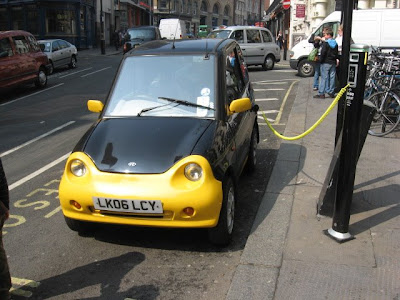 This was a topical sighting, since one of today's big news stories is that

Consumers are to be offered incentives of up to £5,000 to purchase an electric car under government plans to be unveiled today that will also see the creation of electric car cities across the UK and the launch of large-scale experiments with ultra-green vehicles. The proposals are part of a £250m strategy, seen by the Guardian, spelling out a revolution in Britain's road transport network based on ultra-low carbon vehicles.

Last week Boris Johnson, the London mayor, announced his intention to make the capital a showcase for electric car technology by putting 100,000 electric cars on the roads.

Electric cars at present are bought by the most affluent members of society. All that will happen with this scheme is that families with 4X4s will be given a subsidy not to replace their car but to get another one, more suitable for zipping around London. This scheme is likely to put MORE cars on the road, not less.

'Green' cars are a contradiction in terms. As today's Guardian says

Green cars are not so green if their electricity comes from a Kingsnorth, or some other smoke-belching power station.

Electric cars are being manufactured to exceed the national maximum speed limit and to go faster and faster. The government is in a powerful position to demand a speed no greater than 70 mph - in reality a maximum speed of 50 mph for ALL cars would have spectacular results in terms of cutting road deaths - but it naturally won't bother.

The car industry wants the government to give customers £2,000 cash for swapping cars that are at least nine years old for newer models. The problem is, it provides dubious economic benefit, probable environmental harm and, crucially, will only heighten Britons' dependence on cars when we ought to be weaning ourselves off them. The economics are simple: all taxpayers - princes and paupers alike - will be paying for a few lucky souls to treat themselves to a new car.

These photographs indicate not a solution but a problem. Why does anyone need a car to get around the West End? Why are cars permitted in a crowded urban environment well served by public transport? Note in the background the choked cycle stand. While electric cars are touted as the future, something as basic as cycle parking remains marginalised and inadequate. 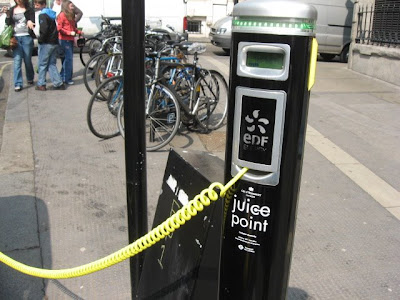 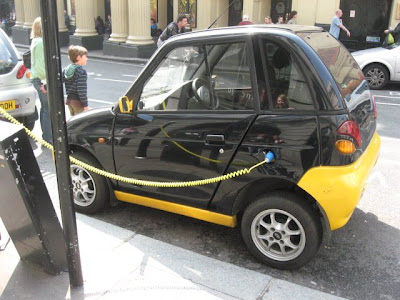