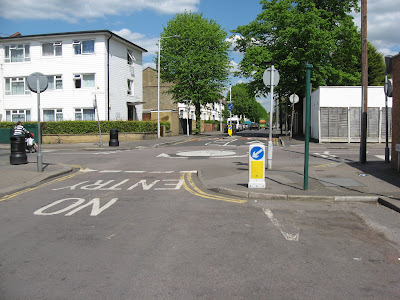 The above photograph is taken at the junction of James Lane E10 and Essex Road, looking north east. Both roads are strategic cycle routes. James Lane is nominally a 20 mph road and features on the Sustrans 'Olympic Greenways' map. In reality it is a lethally dangerous road where drivers don't take a blind bit of notice of the speed limit, not least since St James Lane is mostly on a slope, and the only restraints on speed are those poxy rubber speed cushions, which fail dismally to slow speeding vehicles and which simply encourage erratic behaviour as drivers move out into the middle of the road to get their tyres to go through the gaps. And Essex Road is the natural choice if you are cycling west from the Leytonstone tube station area, by the most direct route, along nearby Fairlop Road.

Any cyclist heading south along James Lane and wishing to continue in a straight line, or wishing to turn off Essex Road into the short section of James Lane to the south, can't. There's a NO ENTRY sign and a chicane. It was presumably done to prevent rat-running. But whoever designed this - undoubtedly an able-bodied car driving highway engineer on an agreeable car allowance - completely failed to take into consideration cyclists. There is no reason at all why a cycle lane could not have been incorporated. This section of road is not one-way, except at this pinch point.

Cycling was ignored because cycling doesn't matter. The physical lay-out of the roads of the London Borough of Waltham Forest and the conditions to be experienced on them are comprehensively hostile to cycling, in innumerable ways. And they are plainly going to go on being so, long into the future. 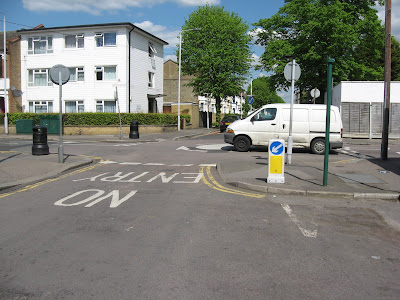