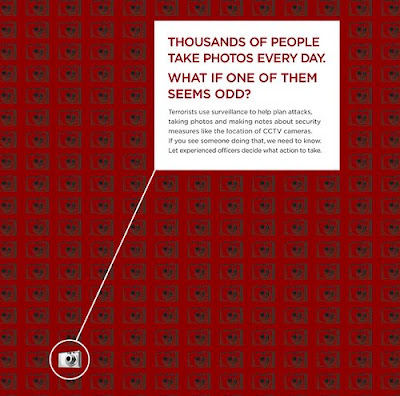 Since 9/11 the threat of global terrorism has given the state - and its security apparatus - carte blanche to take whatever measures it deems necessary. And it has imbued in every uniformed operative, from "Community Support" officers and the bobby on the beat to the bored guy in the airport checking your toothpaste, the kind of arrogance we once associated only with authoritarian regimes.

You think I jest? Talk to any keen amateur photographer. As a group, photographers have been subjected to increasingly outrageous harassment by police and security operatives. (For a partial list of incidents see here) Try photographing a bridge, public building or a police car parked on a double-yellow line and you will have a goon demanding your camera, image card or film.

The new Metropolitan Police Commissioner, in a previous incarnation, said:

"Any criminal justice system to be effective has to be seen to be fair. It just cannot be right when people feel that our response within that system is disproportionate.”

Sir Paul Stephenson said that back in 2004 when he was Chief Constable of Lancashire. He was referring to ‘people’ who think that it is unfair that ‘those who speed at the lower end’ are treated worse than ‘people who commit criminal offences and who, quite properly and according to guidelines, get a caution’.

Just another senior cop pandering to the anti-speed camera lobby, in short. Whereas if the disproportionate response of police officers and PCSOs to members of the public taking photographs bothers him at all, he doesn't seem to have ever said so.

What puzzles me is what the Met’s official attitude is to members of the public who, quite lawfully, photograph vehicles involved in road crashes. In the past couple of years I have come across the aftermath of five road smashes. In every instance the crash has happened long before I reached the scene. I am not getting in the way of the emergency services. I am not photographing dead, distressed, bleeding or injured people. I am simply photographing vehicle wreckage. This is a perfectly lawful activity, yet on every occasion I have been approached by a police officer, who has demanded to know why I am taking photographs. In three out of five cases I have been told to stop taking photographs.

Why? Why does the Met have such a proprietorial attitude to vehicle wreckage? Is this an official, albeit unlawful, policy? Does it stem from the Commisioner? Does it locally come down from Commander Mark Benbow? Or is it cobbled together in the canteen by officers who think road crashes are nothing at all to do with the public?

And now it is unlawful to photograph police officers, for purposes of terrorism, with a maximum penalty of ten years in prison.

"Taking photographs of police officers will not (except in very exceptional circumstances) be caught by this new offence.The new offence is intended to help protect those in the front line of our counter-terrorism operations from terrorist attack. "For an offence to be committed there would have to be a reasonable suspicion that the photograph was intended to be used to provide practical assistance to terrorists."

Needless to say this not how police officers interpret the legislation. Henry Porter describes yet another instance of an ordinary member of the public receiving a bellicose response from the police: An officer approached me and asked me whether I knew if it was an offence to photograph the police.

Quite a lot of pictures taken at the demo were wiped, at the insistence of the police, as the price for letting people go from their al fresco detention. The video of the assault on Ian Tomlinson was taken by a fund manager who happened to be in town on business. Perhaps he was allowed to keep his footage because he looked like “one of us” rather than “one of them.” This is not a mistake that will be made in the future.

More on this topic here.
Posted by freewheeler at 07:53