Cycle parking at The Whitechapel Gallery 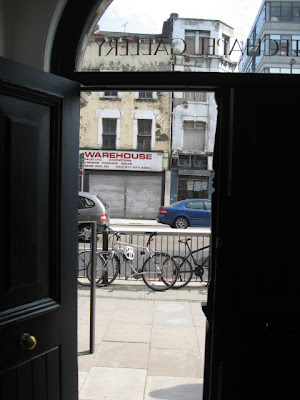 Yesterday I checked out two East London cultural institutions. Both were free. One of them was the newly refurbished and expanded Whitechapel Gallery. In common with numerous other London institutions, the Gallery finds it inconceivable that anyone would choose to arrive on a bicycle. In fact its instructions are equally unhelpful if you were arriving by bus. But the 'how to find us' map helpfully contains the location of the nearest car parks.

I didn't notice any cycle stands in the vicinity and the railings outside the Gallery were choked with locked bikes. This sort of crap once again underlines what a hopelessly backward and hostile city London is for cyclists.

Never having been to the Whitechapel Gallery before, I found it a disappointment. It's full of self-indulgent postmodern rubbish, which didn't engage me and didn't seem to be saying anything. It's lazily conservative third-rate art masquerading as the avant-garde. It would have been electrifying a hundred years ago but now it's the new orthodoxy. It was a merciful relief to encounter canvases by Lucien Freud and Peter Doig, who are authentic, original and gifted artists. I ended up being more interested in looking at the other visitors. The people wandering around the Gallery were far more striking than the exhibits. In short, last year's exhibition of graffitti art and installations in the tunnel behind Waterloo Station by Banksy and other artists was vastly more interesting and involving than the stale and tired crap on show at the Whitechapel.

The woven lifesize replica of 'Guernica' didn't do anything for me. A bit pointless. There was also an anti-imperialist carpet, underneath a slide show of what I assumed were wounded Iraqi children. Sorry, that didn't work for me either.

The cafe is reasonably priced and I have no complaints about the coffee or my chocolate brownie.

If the Gallery ever manages to fill its spaces with some original and engaging art I'll go back.

The other place I visited turned out to be much more interesting. I'll blog about that later in the week.
Posted by freewheeler at 07:23