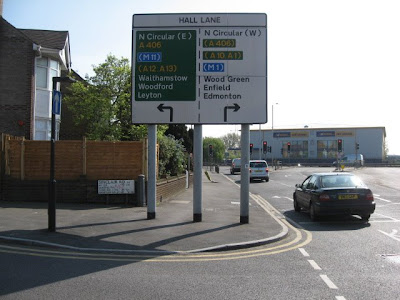 Every couple of years the Council announces a grand clutter strategy. This sort of pledge, which claims (PDF format) the borough will

Carry out a comprehensive anti-clutter exercise to rationalise and reposition street furniture and signage.

As you can see from the photo above, which shows the pavement on Hall Lane E4, the policy has been a triumphant success, with the footway reclaimed as a friendly environment for pedestrians.

Not that the council’s official anti-clutter strategy seems to be known to whoever wrote the Cycle Parking Standards planning policy document for Waltham Forest, which notes (PDF format) that

The anti-clutter policy becoming more popular with certain local authorities is also taking away the other time-honoured methods of securing bikes to guard-rails and waiting restriction poles.

Ironically the first great anti-clutter strategy back in 2004 seemed to result in little apart from the usual smiley-faces story in wfm and, er, the removal of various signs for cyclists. I’ve discussed this topic before.

And did you spot a mysterious object rising out of the pavement beyond the sign in the pic above? Yes, it’s the stump of another lamp post, demolished by a motorist who ‘lost control’. And if no one was injured then this crash will never appear in the 2009 statistics, and we will be told that our roads are safer than they have ever been before. 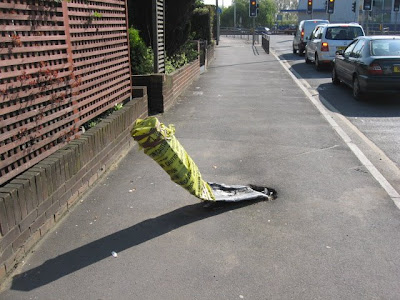