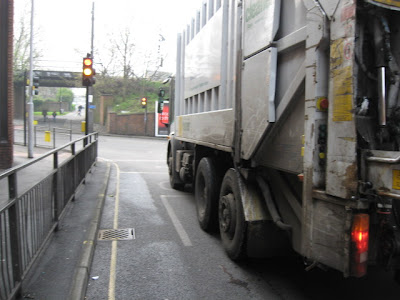 This is a London Borough of Waltham Forest refuse truck, reg. HX53 WML.

The driver drove into the Advanced Stop Line for cyclists, on Willow Walk E17 at the junction with Selborne Road, yesterday, around 9.50 a.m. While waiting at red, the driver didn't bother to signal whether he was turning left or right. I stayed behind the vehicle, took out my camera and managed to get this shot, just as the lights started to change to green. As it happened, the driver turned right.

What bothered me more than the very poor standard of driving was to see that the largest of the two left wing mirrors was broken, shattered into fragments. That is not only unlawful but criminally irrresponsible in a month when two London cyclists have died under the wheels of left-turning lorries.

Someone in this council has the responsibility of seeing that its vehicle fleet goes out on the roads in a safe and lawful condition. Whoever that person is, they are not doing their job properly. And drivers should refuse to operate vehicles in this condition. But plainly no one cares.
Posted by freewheeler at 08:53