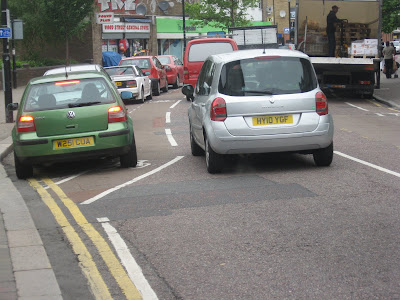 Everything. It’s a diversion and an obstacle to the development of mass cycling. And it’s no coincidence that this campaign is the brainchild of a leading figure in the London Cycling Campaign.

‘3 feet please’ with its wheedling plea to motorists to be nicer to cyclists sums up all that’s wrong with British cycle campaigning. It’s about urging drivers to give cyclists at least 3 feet when passing

Trying to change driver behaviour by appeals to their better nature is a futile strategy with a proven record of failure.

we think there should be a mandatory minimum three feet of space between bicycles and passing motor vehicles. More and more countries are adopting safe passing rules, including France and 15 US states.

France and the USA are not exactly world leaders in creating safe cycling environments or in modal share. But in any case, even if this campaign was ultimately successful in getting legislation passed, who would enforce it? Hasn’t the man behind this campaign “David Love, LCC Trustee and Vice Chair” noticed that the Metropolitan Police have never enforced a single Advanced Stop Line anywhere in London? Why bother to ask for more laws to protect cyclists when the ones which already exist are not enforced?

However, the fundamental flaw of this campaign is that it is about trying to ameliorate the conditions of vehicular cycling. And this is the problem at the heart of British cycle campaigning. Vehicular cycling might make sense to the tiny, hardened minority of regular cyclists who have learned to adapt to life among motor traffic, but it is a failed strategy if you want to see cycling rise above a tiny modal share of one to two per cent. The only reason why cycling has mass appeal in the Netherlands and Denmark is that these countries take cycling seriously, invest heavily in cycling, and above all create safe, convenient and mostly segregated cycling infrastructure. And even within those countries there are significant variations in modal share, entirely related to the presence or absence of infrastructure.

Writing from the perspective of the Netherlands, David Hembrow emphasizes the importance of creating the right kind of infrastructure:

The cycle paths here are 2.5 m ( 8 feet ) wide, that's the minimum allowed for a unidirectional cycle path. Such paths should also be separated from the road by a minimum of 1.5 m (just short of five feet), however, in this case, the separation is actually about 4.5 m ( 14 and a half feet ).

Back in Britain there is currently a campaign called "3 feet please", which is asking merely for motorists to give cyclists 3 feet ( 0.9 m ) of clearance as they pass cyclists. The campaigners behind this correctly notice that "Fear of traffic" (i.e. a lack of Subjective Safety) prevents people from cycling in Britain, but their suggested fix is woefully inadequate.

This provoked a response from David Love in the Comments, who among things writes:

Sure, segregation would be great but in London at least there's no room and no money so it's not going to happen.

As for the claim that there’s no money. This is an absurdity. The problem is that transport budgets are focused on car-centric planning – motorways, by-passes, ‘easing congestion’ – and public transport, while cycling (and walking) are wholly marginalised. I always find it sickening to hear prominent members of the LCC like Koy Thomson saying how cheap it can be providing for cyclists (nor am I at all surprised, incidentally, to discover that Thomson has turned out to be yet another charity hopper).

David Love’s fatuous and doomed campaign makes the perfect partner to his other folly:

I also started the Share the Road campaign in the UK which now enjoys broad support amongst London’s transport community. Our message is that cyclists and motorists are often the same people just doing different things, and that they should respect each other’s right to use the road.

I hate this sort of crap, and I’m not surprised that Love chirpily admits to driving a Mercedes Benz. I am not interested in respecting the rights of people who choose to make short journeys around London in vast, gas-guzzling 4X4s. I want to see streets like Regent Street completely rid of private cars. I don’t want to see parking bays for taxis and stretch limos, I want that road space for cycling.

But the LCC doesn’t. It’s a collaborationist outfit which wants cyclists to respect the status quo rather than challenge it. Its vision is of low-cost, paltry changes to a cycling environment which deters rather than encourages mass cycling. It’s a failed organisation which offers nothing but yet more failure.

I’m also intrigued to see that

LCC has appointed headhunting firm Harris Hill to assist in the search for a new CEO.

I mean, WTF. Save yourself a packet, LCC, and just give the job to this guy.

My photos above and below were taken yesterday, standing on the corner of Vallentin Road and Wood Street E17, looking north. They show a section of the London Cycle Network (you can just see the blue sign in the top left corner of the first photo). The infrastructure encourages drivers to come very close to cyclists, and crap, dangerous cycling infrastructure like this is never going to encourage mass cycling. Behind me, on the wall on the other side of the road, was a massive advertising hoarding urging people to take up cycling. The '3 feet please' campaign makes no sense at all on London streets like these. 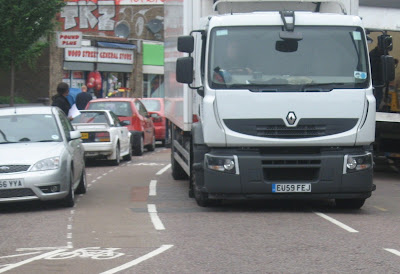 Posted by freewheeler at 10:59