What's this obstructive and ugly pavement obstruction? It's an advertising panel urging us all to walk! (Willow Walk, E17) It seems to depict two children wearing helmets and running for their lives - crossing a local road, I suppose. 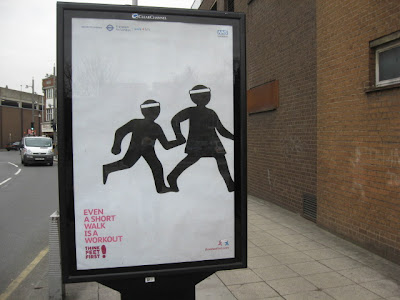 To launch Think Feet First we are running a London wide poster campaign. Each of the adverts uses an often overlooked truth to show how walking can benefit us all. It isn't rocket science but they are little reminders of the benefits of going by foot that prompt us to ask, can I walk it?

This crap is sponsored by The Mayor (that's right, the same Mayor who is hostile to pedestrianisation, and who has slashed pedestrian crossing times), TfL (which has signally failed to make London a walking-friendly city) and the NHS (which at the local flagship hospital promotes car dependency at the expense of cyclists and pedestrians).

In reality the walking environment is all too often decayed, unswept, obstructed, or with a neglected infrastructure. Prepare to make your descent into this grisly underworld (below) on Stirling Road E17. 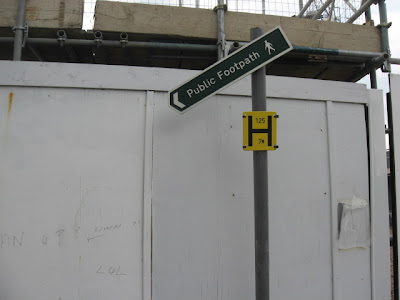 (Below) One of numerous signs at the Crooked Billet underpass which are pointing in exactly the opposite direction to what the sign says. The crap council hasn't sent anyone along to correct the signs during the 18 months I've been blogging about this problem. 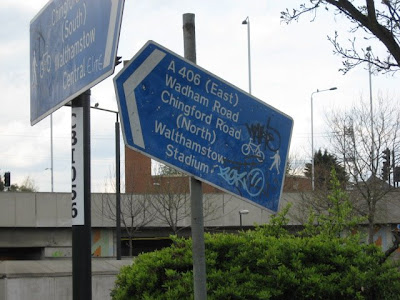 (Below) Brandon Road E17. The pavement is repeatedly blocked at this spot by someone who dumps sacks and a bin across the footway by this tree on a regular weekly basis. It's been going on for over a year and I've blogged about it before. Needless to say the crap council hasn't lifted a finger to put a stop to this anti-social behaviour. 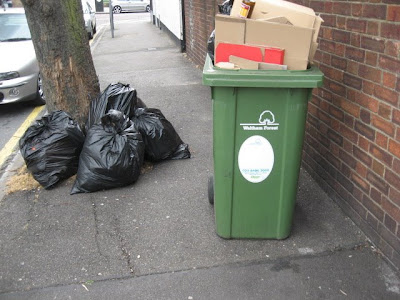 Incidentally, I followed the Think Feet First website link which supplies information on low-air-pollution walking routes. I chose Leyton to Walthamstow. It directed me along two streets: from High Road Leyton along Hoe Street. In other words, two of the busiest roads in the area, where air pollution is at its highest. Another sign that this ‘campaign’ is in the hands of car drivers, who don’t know the area.

This poster crap is part of a national campaign, which includes a section devoted to the glories of walking in Bristol. It seems to be a different Bristol to the one shown here and here.
Posted by freewheeler at 08:10