Crime and violence in Waltham Forest 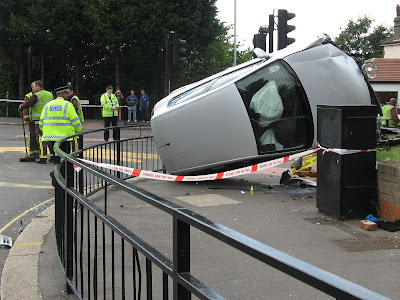 The railings are there for the protection of pedestrians...
The junction of Forest Road and Hale End Road E17 (just down the road there are two schools). July 2008.

"The only problem with crime maps is that it provides a snap shot. You might have a particularly bad day when lots of cars are broken into in a car park.

A very revealing example of the car-centric thought processes of those who manage London’s seriously under-performing police force.

The spectacular number of uninsured drivers in London could easily be reduced through automatic number plate detection technology, but stuff like that is anathema to London’s top cops. The Commissioner and his top Commanders enjoy a chauffeur-driven limo lifestyle that detaches them from the real world. Traffic policing is an undervalued part of the police service and numbers and resources have been massively reduced in recent years. And as was revealed in the aftermath of the black cab rapist case, the police in some parts of London regard rape as a crime less important than vehicle theft.

I can echo these sentiments from a cycling blogger in a different part of London:

I asked my self the other day when was the last time I saw a traffic police car on the road driving around? hmmmm… I thought long and hard but couldn’t give my self a definitive answer. Either they are doing a great job of hiding but not catching anyone or there aren’t any.

When Commander Wisbey talks about

serious violence in a public place

he plainly doesn’t have in mind that which is euphemistically identified as ‘road accidents’.

The most recent casualty figures over a period of 12 months show 28,696 killed or injured in London. If you added ‘damage only’ crashes (for which reliable figures are only available through insurance claims) you’d have to massively increase the number of collisions which occur in the capital.

Law and order has broken down on Waltham Forest’s roads and I don’t think Commander Wisbey has even noticed. Red light jumping, speeding, reckless driving, drivers on mobiles... I'm always amazed how many vehicles don't even have two working brake lights.

But not to worry. The borough is on track for its ‘road safety’ casualty reduction targets, with one exception.

Cyclists.
Posted by freewheeler at 14:52