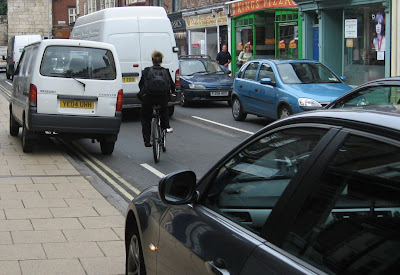 I often come across this argument on cycling discussion threads. Don’t ask for the impossible (i.e. Dutch cycling infrastructure) but rather continue in the traditional UK cycle campaigning fashion of seeking small-scale improvements to the vehicular cycling environment. This approach, it is argued, is drawing more and more people to cycling, and this will result one day in a critical mass being established, after which it will then become realistic to ask for what at present is an impossible dream:

At some point (say above 5% modal share) it will be possible to demand large scale reallocation of road space in favour of people on bikes.

But where’s the science behind that often-cited magical figure of 5% plus? If you look at those few places in Britain where modal share is higher than 5 per cent, sometimes very considerably so, this hasn’t happened. Look at Cambridge. Look at York. Both cities have high modal share and active cycle campaign groups, but in neither city is the local authority inclined to engage in large scale reallocation of road space in favour of people on bikes.

Look at Edinburgh, where commuter cycling modal share has crept up to 5% (or by some accounts 6%). Edinburgh has signed up to the targets of 10 per cent general modal share and 15 per cent commuter cycling modal share by 2020. Those are incredibly ambitious targets to achieve in the next nine years, particularly when recent figures indicate a decline in utility cycling in this city. You could certainly achieve those targets if you re-engineered Edinburgh on the Dutch model. But take a close look at Edinburgh Council’s plans for achieving those targets. They strike me as fragmentary, disconnected and unwilling to address the hegemony of the car in Edinburgh. I don’t believe for a moment Edinburgh will come anywhere near to achieving those targets.

Closer to home, take a look at the extraordinary state of affairs on Blackfriars Bridge in central London. Danny has discovered that at rush-hour, 35.6% of the traffic heading north through the junction consists of cyclists, whereas cars plus taxis make up only 31.9%. The congestion charge and the recession have both deterred private car use in central London.

Yet how has Transport for London reacted to this reality? By designing a new road lay-out which is deeply detrimental to cycling and entirely rooted in classic car-centric ‘smoothing motor vehicle flow’.

Danny deconstructs the TfL plan in detail, noting among other things that

There's loads of space for a proper 2.5m wide cycle lane. But it's being used for cars instead.

As a pedestrian, you won't be able to cross from the Blackfriars pub over to the other side of New Bridge Street any longer (at Watergate). That's an incredibly busy pedestrian crossing.

So in other words, this is classic TfL Network Assurance.

My reading of this plan is that it's designed to allow cars to travel faster through the junction on more lanes. To make it less convenient for pedestrians. To make cycles part of the traffic flow, where they have to leg it across multiple lanes of relatively faster moving traffic than now.

It's going to turn something that is currently a fairly slow-paced junction where it is not impossible to get across the lanes into something that is frankly worse than it ever was before. TfL has designed an urban motorway here, it seems to me.

For a bridge where the majority of rush-hour traffic consists of bicycles not cars or taxis, this is just vandalism. I'm sorry to be so frank but it really is.

It’s really just another version of the vandalism which Transport for London has vigorously promoted in the London Borough of Waltham Forest on two direct routes for cycling - Forest Road and Wood Street.
Posted by freewheeler at 14:38