What’s so magical for cyclists about York’s ‘magic roundabout’? 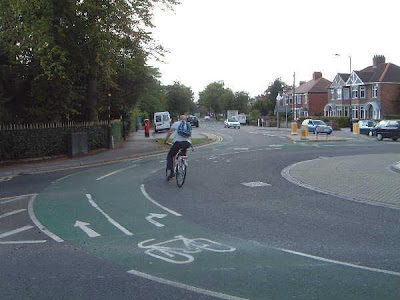 The so-called ‘magic roundabout’ at Heworth Green, north-east of York city centre, was created in 2001 and is widely regarded as a beacon of good practice. The CTC is enthusiastic about it and the photograph reproduced above is one of a number of views of it which are posted here.

The logic behind the design is explained by York City Council’s transport planners:

Continental-style roundabouts (also known as compact roundabouts) have tighter geometry than the typical UK roundabout and are more cycle-friendly as motorists are unlikely to attempt to overtake cyclists on the circulatory carriageway due to its limited width. An overrun apron around the central island can offer a tighter geometry for cars by increasing the island’s effective diameter, while still allowing larger vehicles to use the junction.

The innovative roundabout at Heworth Green (the ‘magic roundabout’) should be emulated where many cycle routes meet at a common roundabout. These should feature wide cycle lanes, a reduced circulatory carriageway width, tight geometry, and a smaller outside diameter than conventional roundabouts. The lanes only position a cyclist close to the perimeter when he or she intends leaving at the next exit – otherwise, the cyclist is positioned away from the perimeter.
(extracted from this document)

 Accidents at the junction have been reduced by 80 per cent.

 Average speeds through the junction are down from 18mph to 12mph .

The ‘magic roundabout’ has even been given a Prince Michael International Road Safety Award. (That's the same Prince Michael who has a string of convictions for motoring offences, including speeding.)

But to my mind the magic roundabout is very far from being the enormous success which it is touted as being. It’s just another piece of vehicular cycling infrastructure – an attempt to make things better for cyclists without in any way seriously affecting the volume and presence of motor vehicles.
Take a look at the photo above. The cyclist is, quite reasonably, ignoring both cycle lanes. The cycle lanes are too narrow and in any case unrealistically require cyclists to take the curving perimeter rather than the most direct route. It’s hardly surprising that some cyclists choose to ignore the infrastructure altogether. That’s what I’d do on this roundabout. Stick to the cycle lane and you risk being cut up by a driver. The cycle lanes also bring you closer to drivers entering the roundabout, which is where most collisions occur involving cyclists.

Much better to ignore the crap cycle lanes and take the primary position, preventing any driver from cutting you up.

This is how it appeared to a journalist writing a feature in 2004:

The students are on their bikes and are negotiating a formidable obstacle known locally as the Magic Roundabout. Cyclists have priority here, but it looks fiendishly complicated and the car drivers are all in a hurry.
In 1994 cycle flow to and from the magic roundabout site on the Malton Road screenline was 300 a day, in both directions. This was prior to the re-design of the roundabout. By 2001 it had crept up to 325.

Then the ‘magic roundabout’ opened to a great fanfare and cycling numbers surged to 470.

Bear in mind that when you measure two-way flow over the course of a day you probably have to halve that number to arrive at the number of actual cyclists using the route, because on a major route you will register cyclists going to their destination and then returning later in the day. So perhaps the most cyclists who have ever used this route in one day are 235. Not an impressive figure for a route which serves a large suburban residential area just one mile (1.6 km) from York city centre.
Presumably cyclists decided that this fabulous facility was not quite as good as it was supposed to be, because flow slumped dramatically to 340 in 2003.

By 2008 numbers had crept up to 414 – still less than the first year after the magic roundabout opened. (Figures extracted from here)

From an orthodox British campaign perspective you could release party balloons and issue a press statement boasting of a 90% rise in cycling since the magic roundabout opened. This is a statistic which, in isolation, is perfectly true. But to understand what’s going on here you need a wider context.

For a start you’d expect to see a few more people cycling in a city like York, which has a growing population and an ever-expanding student population. At the time of the 2001 UK census, the City of York had a total population of 181,094, which has since risen to around 195,400 in 2008.

There’s also one other trifling detail which might just be something to do with the failure of cycling to significantly develop on this route. Since the magic roundabout opened

Traffic flows have increased with 2,000 more vehicles per day going through the junction.

What percentage increase that represents is not identified because the earlier rate of vehicle flow is not given. York has more recent data and I asked for it weeks ago but though I was promised it, it hasn’t been sent to me. York also counts cyclists on Heworth Road, which also feeds the roundabout, but is coy about releasing any data.

This is why looking at cycling statistics in isolation from any wider context can often provide a deeply misleading picture of what’s actually going on. And what’s going on in York is, to my mind, perfectly simple. Cycling is under strain and failing to develop. The figures go up, then they go down, then they go up. But current modal share in the city appears to be less than it was in the 1990s.

The reason, I think, is perfectly simple: the conditions of vehicular cycling in York are simply not attractive enough to persuade people to swap their cars for bicycles. Travel by car remains fast, simple and convenient and the conditions for motoring remain more attractive than the conditions for cycling. York’s credentials as ‘a cycling city’ are seriously exaggerated and the city council is not seriously challenging the hegemony of the car, no matter how progressive it might superfically appear. It’s a mark of how little seriousness is attached to cycling that the city is unable to supply modal share figures on a year-by-year basis for either general cycling or commuter cycling.

Spin over substance and a basic unwillingness to address the hegemony of the car – the old, old story of British cycling infrastructure.
Posted by freewheeler at 09:04