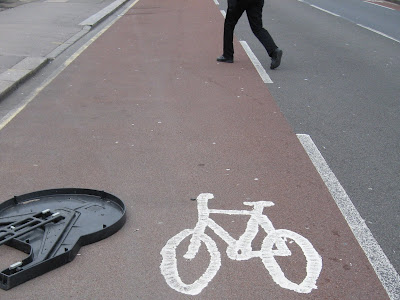 Exciting news of a forthcoming cycling conference in Berlin, where various cycling experts will be giving their ideas on how to improve cycling in Germany (national modal share 10%). And who better than Boris Johnson (Mayor of London), a man who can’t even explain how he’ll achieve his own pathetic target of 5% by 2026.

The only other participant from the UK is top cycling advocate Tom Bogdanowicz, representing London’s phenomenally successful cycle campaign organisation, which has been so good at raising London’s modal share over the 30 years of its existence. Perhaps Tom will be telling the Germans to understand how very important image is – something that will no doubt delight two other top cycling experts who will be sharing their expertise: Pitt Moos (Produktmanager Smart e-Drive von der Daimler AG) and Prof. Dr. Stefan Bratzel (Leiter des Center of Automotive Management).

It’s such a shame that no one from the Netherlands will be present, but, hey, what do the Dutch know about cycling?

A CYCLIST was left bruised and shaken after he was knocked down by a car in York.

The victim, a 52-year-old local man, was travelling along Navigation Road, near to the Bretgate turning, at about 11.45am on Sunday when he was hit by a black vehicle travelling towards Walmgate.

A 42-YEAR-OLD male cyclist from Broadway was taken by ambulance to Cheltenham General Hospital after he was struck by a passing car last Friday.

The man, who had swelling to his right forearm, was cycling home along the A44 Five Mile Drive near Fish Hill when he was struck by the wing mirror of a Land Rover Freelander driven by a 70-year-old woman from Broadway at about 5.50pm.

POLICE are appealing for witnesses following a collision which left an elderly pedal cyclist with serious injuries. The incident took place at around 11.25am yesterday (Tuesday, February 1) on Kinnerton Road, Lower Kinnerton, near Chester.

It involved a collision between a 65-year-old pedal cyclist and a car. The man suffered leg, arm, and head injuries and was taken by ambulance to hospital.

The car involved is a silver Hyundai Tucson four wheel drive, the driver of which was uninjured.

The operator of a road sweeper that collided with a pedal cyclist has been fined £250.

CPS lets another killer off

The family of a cyclist who died when he was hit by a lorry have slammed prosecutors after they abandoned the case against the driver – 17 months after the tragedy.

Harry Wilmers, 25, died after his bike collided with a lorry [sic] outside the Toll Gate Inn in Old Trafford in August 2009.

Judge Peter Lakin formally entered a not guilty verdict to a charge of causing death by careless driving after the Crown Prosecution Service decided to offer no further evidence.

The case hinged on the incorrect position of a ‘proximity mirror’ mounted on the cab door, which is designed to offer a driver a view of a stretch of road the width of the door.

Andrew Jebb, prosecuting, admitted he could not rule out the possibility the position of the mirror was not linked to the death.

A 46-year-old man has been charged with causing death by careless driving over a fatal collision in Essex last August.

Cyclist Vera Chaplin, 89, collided with a car in Frinton Road, Kirby Cross, in the morning and died later in the day.

The Archipelago goes for a walk in Walthamstow, encountering

the mystifying Silver Birch House, a council-owned building kept very much under lock and key. I wondered what went on there

Not a lot, judging from my visit. Although there is a delightful and little known royal association.
Posted by freewheeler at 15:53