Another London cyclist has been killed by a lorry

This happened yesterday in Tooting.

Judging by the time of the collision and the age of the victim, this was probably a child cycling to school.

There has been nothing on BBC London news. But then I've noticed that BBC News devotes far more coverage to stories of 'rogue cyclists' than it does to cycling fatalities, which frequently go unmentioned.

There’s a fuller account in today’s Standard: Witnesses today told how the junction was notorious for accidents. 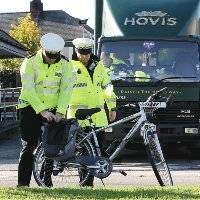 A CYCLIST has been taken to hospital with life-threatening injuries after a collision with a lorry in Flint this morning.

and a probable hit and run in Cheshire this morning:

POLICE have issued an appeal for information after a cyclist was found collapsed unconscious and with serious head injuries at the side of a busy road in Cheshire.The victim who has not yet been identified, was spotted by a passing motorist at the Peckmill roundabout on the Davenham by-pass at Bostock at around 6.30am.

A nine-year-old cyclist has been taken to hospital after being struck by a car in Stonehaven.
Posted by freewheeler at 07:22