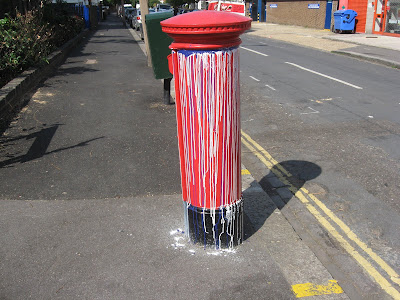 Watch out Gilbert and George! Talented local artists 'Clyde and Bob' are hot on your trail! And their genius has been recognised by the judges of the 2008 Turner Prize, famous for rewarding cutting edge artistic achievement.

Bob's 'The pillar box on Shrubland Road' was hailed by the judges as a brilliant evocation of the surreal world of Waltham Forest and a marvellously satirical attack on Royal Mail for vandalising the postal service. Bob is a well known local prankster, famous for pushing a joke newspaper called wfm through people's letterboxes, telling them that their streets are getting cleaner and cleaner every week.

(Below) Clyde's 'Arcade Site #1' was chosen for its epic sense of desolation and waste. Clyde, who also enjoys a joke, told everyone he was going to build a massive new library at this location and then fooled everyone by producing this instead! It's a truly massive installation which invites the viewer to peer in through wire mesh at an expanse of rubble and weeds, fringed by the detritus of modern society. In the tradition of Tracey Emin's 'Unmade Bed' but on a much grander scale. The resemblance to a first world war battlefield is also unmistakeable, and with his usual panache Clyde has arranged for his art work to be sited here even longer than the 1914-18 war! 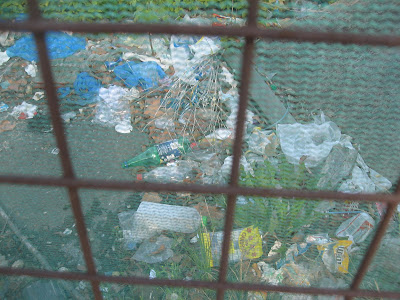 Finally the judges thought Clyde and Bob's joint installation 'Cyclist And Pedestrian Trap #47' brilliantly captures the modern urban experience (below). This thrilling installation lures the viewer into a claustrophobic tunnel resembling a cage or a giant spider's web, divided into smeared and scratched plastic panels. Through the paint-spattered panels glimpses can be caught of passing cars. The judges felt the installation conveyed a subtle sense of menace, with the red handrails signifying both danger and blood. What waits at the far end? Muggers? A killer? Or just a labyrinth of squalor? The judges also commended the abandoned estate agent's board in the centre - 'a wonderful touch, evoking the implosion of modern capitalist society.' This fabulous installation can be seen on Langthorne Road in Leyton, just two minutes walk from Leyton tube station. 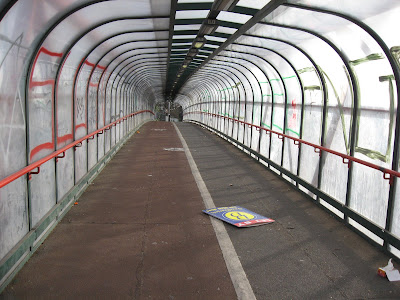 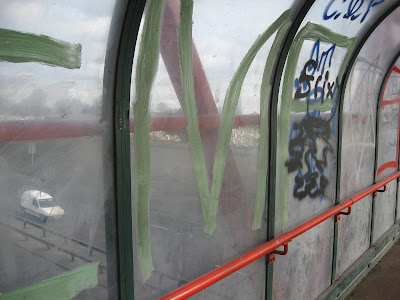 Posted by freewheeler at 08:29