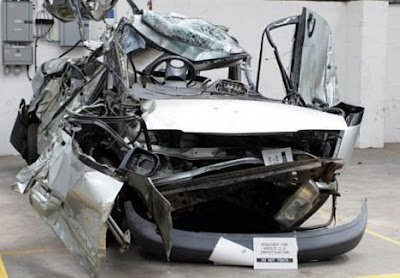 It's a proposal which enjoys massive public support, including among drivers, and it has the backing of the British Medical Association, the Royal Society for the Prevention of Accidents, and the Association of Chief Police Officers. So naturally our 'listening' government has decided not to go ahead with it.

Britain is set to become the only European country allowing motorists to drink alcohol and still be able to drive legally, after a change of heart by ministers. They had planned to lower the drink-drive limit from 80 to 50 milligrams of alcohol per 100 millilitres of blood but now indicate that this will not happen. Safety groups say the existing limit encourages people to "chance it" and have a drink or two before driving but a 50mg limit would make drivers far more careful, as they would risk prosecution after just one drink. Research by University College London predicted that lowering the limit for all drivers to 50mg would prevent 65 deaths and 230 injuries a year in Britain. It would also save the economy £119million a year by reducing medical costs and lost working time.

Why has the government backed off? My guess would be lobbying by the drinks industry. A tougher drink drive limit might be bad for country pubs.

By an ironic coincidence on the same day that the government announced it was abandoning the tougher drink drive limit, footballer Luke McCormick was sentenced for killing two young boys while drunkenly speeding. The photograph above shows the remains of the car he hit:

He was still more than twice the drink-drive limit an hour later when he smashed into the back of a people carrier in which Phil Peak was taking his sons Arron, ten, and Ben, eight, for a motor racing event at Silverstone. Both boys suffered fatal injuries while their father suffered spinal injuries and broken vertebrae. The couple cannot have any more children, police have revealed.

Cathy Keeler, deputy chief executive of the charity Brake, said: 'If someone more than twice the drink-drive limit who kills two people and seriously injures another only gets half the maximum penalty for death by dangerous driving, what on earth would someone have to do to get 14 years?

McCormick will be eligible for parole in three and a half years. Six months after that he will be free to drive again, since

He was disqualified from driving for four years for causing death by dangerous driving.

But why should someone like McCormick ever be allowed to drive again? Shouldn't those who kill other road users and who are found culpably negligent forfeit the privilege of ever driving again?

And needless to say no national newspaper or politician has any comment to make about 4X4s. The car which McCormick slammed into (shown above) was a people carrier, which is not a small car. But these photographs eloquently show the difference between the protection which 4X4s give their drivers, and what they do to other vehicles. McCormick was prepared to risk the lives of others but (below) he enjoyed massive personal protection in a machine cynically designed to break the maximum national speed limit. 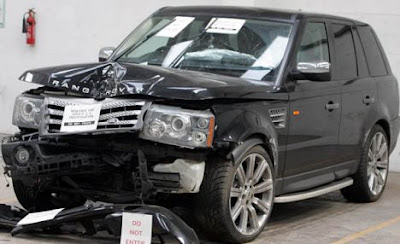 Posted by freewheeler at 06:43