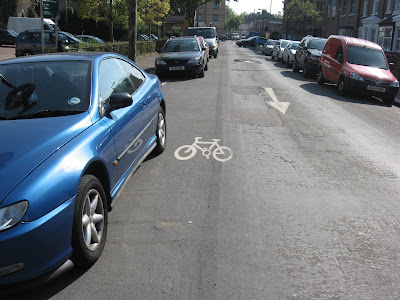 This is a dedicated cycle route, recommended by Transport for London and the London Cycling Campaign, and shown as such on their free map of cycle routes in Waltham Forest. The carriageway markings also invite cyclists to use it. Such a pity this utterly dysfunctional council has made it one-way only. Any cyclists who use this recommended route are now breaking the law. To the left of the blue car in the foreground is a NO ENTRY sign, with no exemption for cyclists.

I'm not going to identify the road, because I want to go on using this route and I resent it being taken away from me. As I stopped to take some pics another cyclist whizzed past breaking the law, so the demand for this cycling route is plainly there. If I say which road it is the council will be down there tomorrow obliterating the cycle route signing.

If PC Plod stops me I shall point to the cycle signing, produce my official TfL cycle map, express incredulity and amazement that I was doing sumfink wrong, and no doubt get away, like yer average prospective killer motorist, with words of advice.

As I've said before, the proliferation of one-way streets in Greater London represents theft of road space from cyclists, and is done to manage growth in car ownership, car parking and car use, at the expense of the safety and convenience of cyclists. There is no reason at all why cyclists should not cycle against the flow on new one-way streets like this, as there is ample space for a bike and a vehicle to pass and the road conditions are no different at all to when this was a two-way street. The traffic flow is also low; this is a very quiet street.
Posted by freewheeler at 08:12