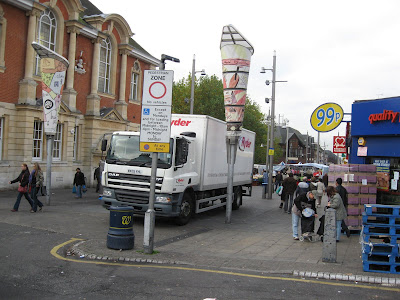 It's becoming a tradition - HGV's unlawfully drive into the top end of the Walthamstow High Street pedestrian zone because their drivers can't be bothered to use the back entrances to the stores. This lorry appeared to be delivering to the 99p store. I suppose this will continue until one day a lorry runs over a pedestrian. 10.35 a.m. yesterday, when no vehicle should be in the zone.

All of the twelve lorries were breaking the law in at least one way. Repeat: a 100 per cent criminality rate among small random sample of HGVs on the streets of central London. The offences range included overweight loads (2 cases), mechanical breaches (5 cases), driver hours breaches (5 cases), mobile phone use while driving (2 cases), driving without insurance (2 cases) and no operator license (1 case). In some cases the drivers were given a warning and in other cases there was a more formal police follow up. No information was given on convictions following this operation. Inspector Aspinall said that the London construction vehicle market (skips, cement mixers, construction materials haulage) was very tight and competitive. Shady operators with dubious standards and legality exerted a downward pressure on market prices and that was forcing even the more responsible companies to cut corners in order to win tenders. Some companies were even factoring into their costs the inevitability of a certain number of fines for breaches of the law.

(Below) It was almost certainly an HGV which demolished this bollard on Church End, at the junction with Orford Road, which narrows here and is totally unsuitable for left-turning articulated lorries. Although obviously the bollard is partly culpable for getting so close to the lorry and not paying more attention. It is also deeply irresponsible to wear black, especially at night. 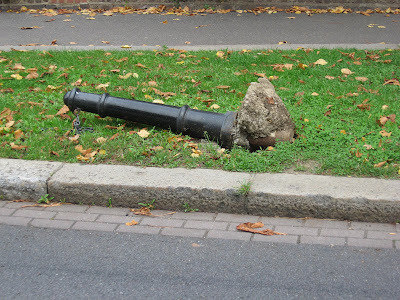 (Below) It was almost certainly an HGV which mounted the pavement and slammed into this cycle stand at The Bell corner. The nearest leg of the stand has been uprooted and the stand twisted out of shape. 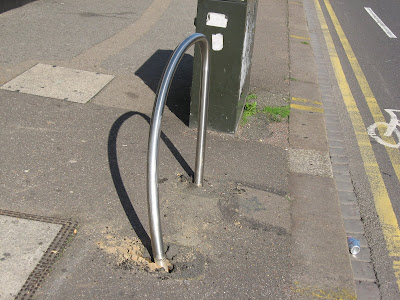 Some practical suggestions on what to do here.
Posted by freewheeler at 07:13