Back to normal (almost) 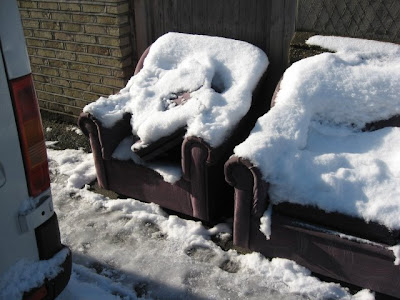 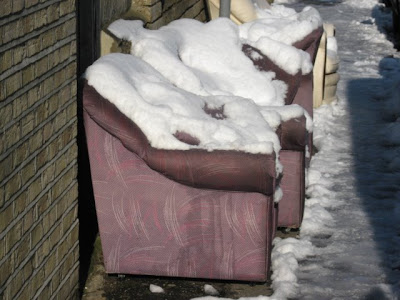 A lovely sunny day, with the snow gently thawing from those luxury three piece suites which dot the neighbourhood of a council which is 'leading the fight against flytipping' and 'wiping out enviro-crime'.

There's a big 'wiping out enviro-crime' banner on Hoe Street, about forty metres from the cycle stand which was removed by the council a few months back (it got uprooted, probably by a heavy goods vehicle) and although it didn't seem to be damaged it wasn't put back. That's now about 20 cycle stands which have vanished in central Walthamstow in recent years and not been replaced. Wiping out cycle stands is, I think, is an enviro-crime.

Walthamstow High Street, road and pavements, seems not to have been salted or gritted anywhere, and the top end by Hoe Street remains one big sheet of ice. The High Street entrance to the bus station still apears to show no signs of gritting and is pure ice. The only gritting for pedestrians that I've come across is in the Town Square today, where, mysteriously, the Big Screen was dead. (Fingers crossed.) So it looks very much as if the council is flagrantly flouting its statutory obligation to keep roads and pavements in a safe condition.

With the slush gone from the main roads, drivers can once again be seen chatting into hand-held mobile phones as they speed through streets dense with pedestrians. The male driver of flash blue BMW reg. MI5 BTY, who was racing along Hoe Street at 11.05 a.m. today, for example.

And why not, since the latest mobile phone killer driver will be back on the roads in 2012?

Giving evidence, the 21-year-old said she had felt there were times when using a phone while driving was acceptable and said she could send and receive messages without taking her eyes off the road. She was disqualified from driving for three years.
Posted by freewheeler at 11:43