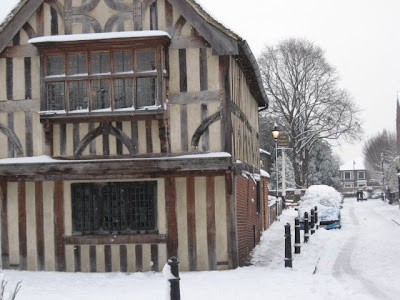 As my Ancient-House-in-the-snow pic has won admiration from as far away as a remote outpost of the empire such as Barkingside (I think I once went to a ‘yoga day’ in Barkingside but it all seems a long time ago now), I think I should say more about those timbers. If you are suspicious of their symmetry, you are spot on.

Those medieval timbers are about four years old and were installed by the sponsors of 'National Gutters Day', Fullers. I don't doubt the site is authentic, and there's probably some sort of medieval core inside, but the exterior is not as old as it seems to be. I wouldn't be at all surprised if inside the Ancient House also has gas-fired central heating and wi-fi.
Posted by freewheeler at 06:09