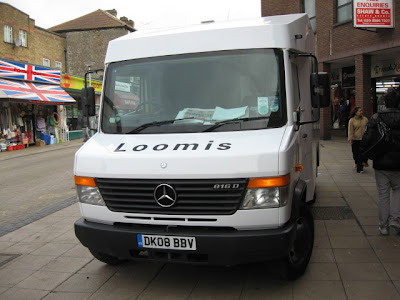 This Loomis driver was either delivering cash or collecting it from Sainsbury's in Walthamstow High Street yesterday, 10.55 am

This Sun-reading Loomis yob drove on to the pavement (an offence) and obstructed it (another offence). Just behind the Loomis van is a police car containing two police officers. Evidently these days the Met is lending out its cars and officers to provide extra security for private security companies. This is a regular occurrence. The patrol car follows the bullion van around as it makes its deliveries/collections, and the officers park behind and sit in their cars chatting. This strikes me as not a good use of police time but helps to explain why so many people complain that when they phone the police, they won't come.

The dim plods in the patrol car (a WPC driver and her skinhead male companion) plainly regarded this sort of parking as perfectly acceptable, but then that's hardly a surprise as the Met is institutionally car supremacist and hostile to the interests of pedestrians, cyclists and other vulnerable road users. (See also this, this and this.) In this context it's hardly surprising that Loomis yobs are contemptuous of pedestrians and cyclists. Some days I'd like to get hold of that rotating triangle outside New Scotland Yard, with its smug and completely untrue mission statement that the Met is WORKING FOR A SAFER LONDON and stuff it down the throat of the new Commissioner, who is yet another top cop whose only traffic anxiety is that speed cameras upset some people.

I decided not to take a pic of the cops in their car as last week a new law came into effect making it an offence to unlawfully photograph a police officer, which as Henry Porter dryly notes surely will be used by every policeman parked on a double yellow line.

Let's say it again. The Metropolitan Police is institutionally corrupt and colludes in anti-social and lawless behaviour by drivers. It has no interest in protecting the weak and the vulnerable on London's lawless and dangerous roads. It is part of the problem, not part of the solution. It is rotten to the core and its own drivers display driving behaviour which is as bad as any on the streets of the capital.
Posted by freewheeler at 07:59