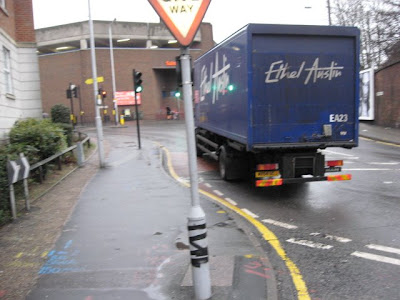 I was cycling along behind this Ethel Austin HGV yesterday morning when I saw it drive into the cyclists-only Advanced Stop Line, at a red light, on South Grove E17. A lawless act for which the driver could be prosecuted - were it not that the car supremacist Metropolitan Police has apparently decided to discriminate against safe cycling by not enforcing this law as a matter of policy.

By the time I'd taken my gloves off, removed my camera from its case, and pressed the button the lights had just changed to green, but I just managed to catch the lorry before it drove off.

We listen to what our customers want.

Any customers who’d like their drivers to obey road traffic law can contact the company here.
Posted by freewheeler at 13:07