Stella Creasy and the environment

Stella Creasy is the Labour Party candidate for Walthamstow at the next election. She replaces Neil Gerrard MP, who is retiring. A new report by the Transport Committee of the London Assembly prompted a reflection about Stella Creasy and Green issues. Or rather, one in particular.

First, some context. Neil is an old Bennite, which by the current standards of the Labour Party practically makes him a Marxist-Leninist. He has a long track record of rebelling against the party leadership.

As for Stella… She was formerly a councillor for Lea Bridge Ward 2002-2006. Her blog is so bland it’s hard to tell where she stands on anything, but my impression is she’s a Blair Babe in the making, or to put it another way, an ambitious, sound, reliable party loyalist. If Gordon Brown suggested that the way out of the recession was for us all to fill our baths with custard and jump in, I have a hunch Stella would enthuse on her blog that she was proud that Britain was a world leader in establishing voluntary targets for personal custard immersion.

Stella is passionate about the environment and cycles to work. Well, sort of. I’ll leave the cycling-to-work story for another day. For today, comrades, let's stick to impending climate catastrophe.

I believe these measures reflect a renewed commitment by Labour to make Britain take responsibility for our part in global warming and also offer leadership on the need to act internationally as well. I also recognise addressing climate change will require more work being done at a national level so I look forward to the outcomes of our transition town discussions at a local level and to hearing your views on how we can support action to address climate change here in Walthamstow.

Let’s overlook such trifles as this caring green Government’s subsequent embrace of the expansion of Heathrow airport, or its intoxicating vision of more and more coal-fired power stations, or its lavish expenditure on motorway 'improvements', or its genuflection to the road lobby over fuel tax, and instead narrow the focus to the London Borough of Waltham Forest.

Sadly, Stella doesn’t seem to know about this blog, which is full of handy practical tips for saving the planet. Sweeping cycle lanes once a day to get rid of all the broken glass, say. Putting a stop to the proliferation of legalised pavement parking, a policy which encourages multiple vehicle ownership, the ownership of larger vehicles, and car dependency, all at the expense of walking. Junking that expensive, wasteful and boring council propaganda rag wfm. Getting rid of all those unsightly and obstructive council-approved advertising panels which have been plonked down on pavements all over the borough. Producing a map of all the footpaths and rights of way in the borough. Seeing that those walking routes are accessible and properly maintained. Persuading the Mayor(ess) not to turn up to the annual Green Fair in a limo but walk or cycle there instead. Putting in Advanced Stop Lines for cyclists at all signalled junctions (which purports to be council policy but is one which isn’t implemented – cycled down Church Hill lately, Stella?)

And then, of course, there’s this. Can you spot what’s missing? Can Stella? 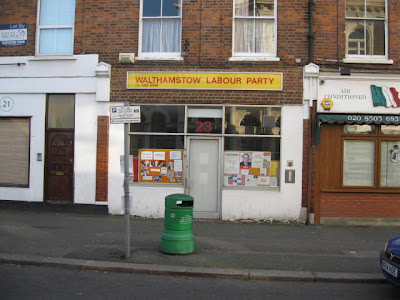 One of the many sites in the London Borough of Waltham Forest which lack any cycle parking is... the HQ of Walthamstow Constituency Labour Party on Orford Road E17. So, Stella, why not? Why are there no cycle stands anywhere on Orford Road, then? Nowhere in Walthamstow Village is there a single cycle stand, despite all the restaurants, pubs and shops. The Labour Party discourages cyclists from attending its HQ, even though local councillors hold surgeries there.

Meanwhile the London Assembly is worried:

The availability of cycle parking and the security of parked bikes may be holding Londoners back from making their journey by bike. The Transport Committee has launched an investigation – led by Joanne McCartney AM - to identify ways of increasing the provision of good quality cycle parking.

It's not just a Waltham Forest problem, of course. Cycle parking in Greater London is grossly inadequate at every level. Take a look at the main entrance to Waterloo Station, where vast quantities of bikes are locked to every available piece of railing and street furniture. Or consider The Museum of London. Until very recently it made no mention at all of available cycle parking provision. It has now belatedly added this luminous item of information:

There are 2 cycle racks at the junction of Noble Street and London Wall, very close to the museum.

Gosh, as many as two!

And I was amazed to discover that Tate Modern does have cycle parking. It’s just out of sight, somewhere round the back or the side or somesuch. So cyclists either don’t know it’s there (e.g. me), or prefer not to use it, because the railings outside the gallery are closer and more convenient, and very visible.

Secondly, bike theft is plainly a major problem in certain parts of London. Of the four people I know who have given up cycling, one was deterred by having her bike stolen. For her, that was the last straw.

As far as the London Borough of Waltham Forest is concerned, I’ve never personally felt that bike theft was much of a threat, but maybe I’ve just been lucky, or maybe the kind of bikes I use aren’t attractive to thieves. I am far more concerned about the laughably inadequate nature of cycle stand provision in Waltham Forest, which is patchy and incoherent. In some places it is excellent (e.g. outside the mosque on Queens Road or the three Bike Sheds), in other places non-existent. Sometimes where the provision does exist (e.g. in the Walthamstow High Street area) cycle stands continue to be regularly obstructed by identifiable traders, to the total indifference of this crap council. Other stands are loose but nobody cares. Many stands have mysteriously vanished.

Four out of ten local libraries have no cycle parking. The overall picture is one of incoherence and neglect. For numerous examples simply go to my Labels list and scroll down the entries listed under inadequate cycle stand provision. Someone better tell Stella...

What do we want?

When do we want them? 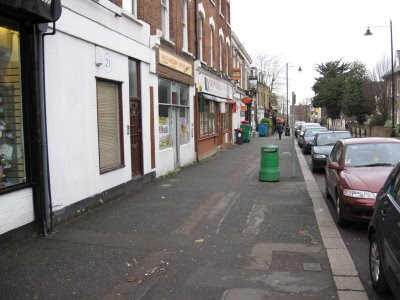