CYCLISTS will be allowed to ride the wrong way up one-way streets in the City in a new scheme to encourage more people to ride to work in the Square Mile. The Corporation of London has agreed permission to allow cyclists to ride against the traffic in seven streets in a £45,000 project beginning in early summer.

The streets involved in the project are: West Smithfield - connecting to Giltspur Street; Salisbury Court; Throgmorton Street; Cloth Fair; Finsbury Circus - at Moorgate; Creechurch Lane and the east half of Fann Street.

Anyone have a bad word to say about this? Yes, it’s him again!

Edmund King, president of the AA, warned of a potential danger to pedestrians. "On a number of one-way streets we have witnessed problems with pedestrians checking traffic in the one-direction, stepping out on to the road, and then nearly being hit by cyclists riding illegally the wrong way."

But as I’ve argued before, in connection with Selwyn Avenue, Highams Park, every new one-way system represents the theft of road space from cyclists. What’s more, the London Borough of Waltham Forest is now converting even dedicated cycle routes, recommended by Transport for London and the London Cycling Campaign, into NO ENTRY roads.

Dedicated contraflow systems on one-way streets are to be welcomed, but do not in my view address the much bigger problem of the proliferation of one-way streets in Greater London. The solution is perfectly simple: allow cyclists to cycle the ‘wrong’ way on ALL one-way streets.

Here are five examples of how one-way streets in Waltham Forest actively discriminate against the convenience of cyclists by denying them safe, direct, quiet routes. The one-way streets featured below all actively obstruct direct cycling routes, by prioritising on-street parking and motor vehicle flow. 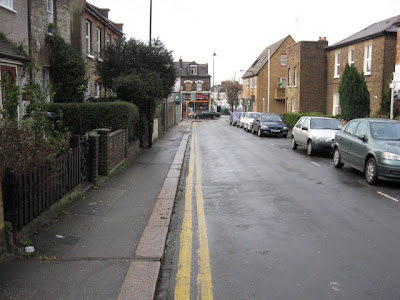 (Above) Stand here and you'll see scores of cyclists riding 'the wrong way' down this short section of one-way street on Milton Road E17. The reason is that this forms part of a popular, if 'unofficial' straight-line cycling route, linking The Drive with Hatherley Road. If the council knew anything about how cyclists actually behave they'd convert the very wide alleyway between Howard Road and Aubrey Road to shared use, and introduce a contraflow lane here, which would be very easy in view of the double-yellow lines which run the whole length of the one-way section. 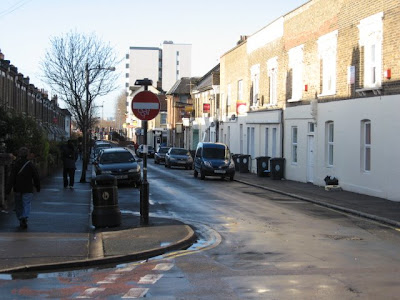 (Above) A direct route from Walthamstow Village to the dedicated cycle crossing lights to Selborne Road on Hoe Street is obstructed by this NO ENTRY sign on St Mary Road E17. On-street parking (quite light on this occasion) is a higher priority than a direct cycling route to a dedicated cycle crossing. Cyclists, ludicrously, are expected to turn right on West Avenue Road, go down Church Hill, then left along Stainforth Road, in order to rejoin St Mary Road. Naturally they don't bother, and either cycle against the traffic flow or on the pavement. And as I now know, even Walthamstow Labour Party's prospective parliamentary candidate sins here. 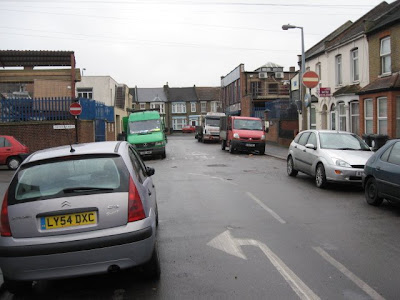 (Above) A direct route to Grove Green Road E11 and the nearby junction with Cathall Road has now been obstructed by the London Borough of Waltham Forest, which has made this short section of Elm Road one-way, with NO ENTRY to cyclists using this route via the dedicated cycling facility at the Twickenham Road/Francis Road junction. 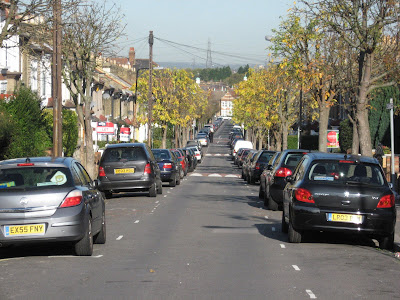 (Below) I used to cycle along Peterborough Road E10 and cross Forest Road into this road (Western Road E17). But at the Forest Road junction it has been made NO ENTRY, denying cyclists a quiet back street route in the Village area. Posted by freewheeler at 08:27