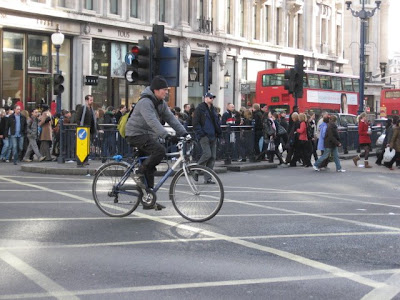 Irresponsible and negligent cycling? This guy isn't wearing polystyrene coated in a thin plastic membrane on his head!

You are cycling perfectly carefully and lawfully when the driver of a 4X4 who is texting on a mobile phone slams into you from behind. You are thrown to the ground and suffer massive head injuries. Under a new legal judgement you can now be held partly responsible for your injuries, if you are not wearing a cycle helmet.

A new High Court judgment means cyclists who don't wear helmets can be guilty of contributory negligence if they are injured in a road accident in the UK. Cyclists who "expose themselves to a greater degree of injury" by not wearing a helmet can now be found to be negligent, even though it is not a legal requirement in the UK to wear head protection when cycling.

This particular High Court judge is plainly unaware of the research which shows that drivers take more risks and drive closer to cyclists wearing helmets than to those who don’t wear them.

This is a disturbing legal precedent, because it fits in with a lot of other blaming-the-victim stuff. Run down on a zebra crossing at night? It’s partly your fault for wearing dark clothing. Hit from behind on your bike on an A road by a speeding maniac? Partly your fault for choosing not to use that crappy glass-strewn off-road cycle lane.

Statistically, a car passenger is more likely to suffer a serious head injury in a crash than a cyclist. But no car passenger would be regarded as "exposing themselves to a greater degree of injury" because they weren't wearing a helmet.

This is a bad legal judgement, which is just part of the rich texture of a car supremacist society which indulges all those individuals who wilfully operate dangerous machinery with criminal negligence - like the woman in the blue 4X4, reg. VE52 NYC, who was chatting into her handheld mobile phone while driving along Hoe Street yesterday at 10.42 am. She was followed shortly afterwards by a man in a camper van who was steering blind while holding a mobile phone in his hand and texting. I didn't get his number because I was still writing down the first one. No cyclist hit by criminal drivers like these should be held partly responsible for any head injuries they receive, just because they are not wearing a helmet. The fault lies one hundred per cent with the driver.

See these two contributions to the topic from David Hembrow - Three types of safety - and helmetless Rob Ainsley.
Posted by freewheeler at 07:19