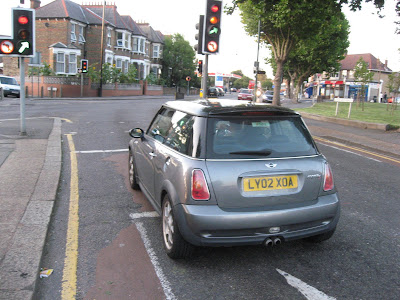 Tuesday evening. I was almost at the end of Leyton Green Road (B159), approaching the junction with Lea Bridge Road (A104). The lights were at red. The ASL was empty. And just as I approached it, this yob overtook and occupied it. I fired off this snap just as the lights changed.

The London Borough of Waltham Forest is under the control of two individuals, the "car crime" obsessed Commander Mark benbow, and his deputy Sue Williams, who comes up with froth like this:

Waltham Forest acting borough commander Sue Williams said: “It is our duty to provide the best possible service to the public and this includes being visible on the streets and in your neighbourhoods to prevent crime from happening in the first place.

Oh really, Sue? As a cyclist I think I am getting zero value for money from the money I have to pay in council tax to your crap police force. The Met is a bigoted car supremacist organisation which is indifferent to its duty of care to vulnerable road users. Thousands of crimes are committed everyday in Waltham Forest but as they go unrecorded they don't concern the Met. Stand at this junction, or at The Bell Corner, or at numerous other junctions, Sue, and watch the hundreds of crimes committed there every day by drivers. They unlawfully obstruct the ASLs for cyclists, they chatter on handheld mobile phones, and, at The Bell, they then they go speeding off past Walthamstow police station, where the fatuous "advisory" speed sign registers (or rather, doesn't register) thousands of speeding offences everyday. And frankly, Sue, neither you nor Benbow give a toss.
Posted by freewheeler at 08:56