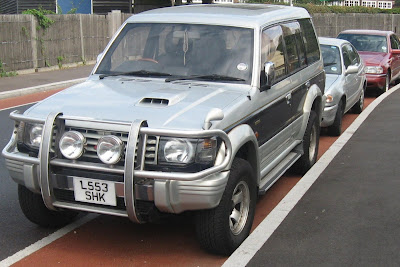 Another picture from the cycle lane outside Leyton Green Clinic (which lacks even one cycle stand). This picture just about sums it up, I think. London is a city which puts the interests of this 4X4 driver over that of cyclists. And while the media froths about young people carrying knives, it is perfectly relaxed (as are the police) about murderous bull bar attachments, suitable for killing child pedestrians at even less than 20 mph. But then I would not be particularly surprised if this vehicle belonged to an NHS worker or a police officer (or a teacher, or a magistrate, or a Crown Prosecution Service lawyer).

All these drivers are quite legally parked in the cycle lane, which forms part of 'The London Cycle Network' and which here exists as nothing more than a token and wholly meaningless gesture towards cycling. And allows the Council to claim it has spent money on cycling, when in reality it has done no such thing.
Posted by freewheeler at 13:33