The Mayor of London: "I'm sure that the cycling revolution taking place in the capital will rapidly become the envy of the world."

That's right, Boris. David Hembrow must be kicking himself he moved to the Netherlands, when instead he could be luxuriating in the magnificent cycling environment to be found in the London Borough of Waltham Forest. Like this cycle lane on the A503. 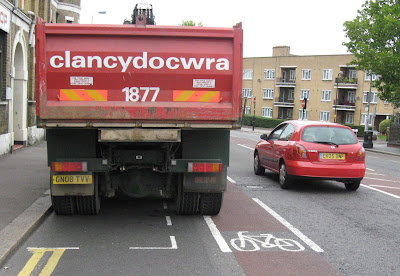 Two years ago the Council decided to shift the cycle lane out away from the kerb, in order to accommodate parking bays. Never mind that this is on a bend, on a section of road with a phenomenal record of crashes, fatalities and drivers "losing control". Mainly because of speeding.

The cycling officer didn't want the lane moved, and neither did the local branch of the London Cycling Campaign. But shopkeepers have more clout with councillors than residents. And because there is a cafe here, the bays are popular with HGV drivers who stop for a cuppa. As the driver of this vehicle is probably doing (there are no roadworks in the vicinity).
Posted by freewheeler at 09:08