Why I don’t think Sir George Alberti rides a bicycle 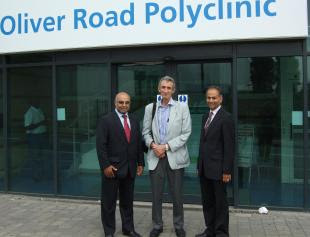 AN NHS boss has given the new Leyton Polyclinic his seal of approval. Sir George Alberti, national clinical director for emergency access, visited the Oliver Road clinic to see whether the new clinic is working well.

Part of a tour of London health services, Sir George was “delighted” by the new service, which officially opened its doors earlier this year.

Well, Sir George, as a user of the Oliver Road Polyclinic I am not delighted. In fact I think this Polyclinic is the perfect symbol of the car-sick, complacent, ill-health promoting NHS.

If I turn up by car there are three parking bays, conveniently situated near the entrance. If I turn up on a bicycle there is nothing.

Take a look in both directions: 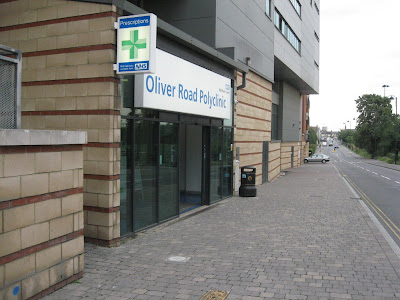 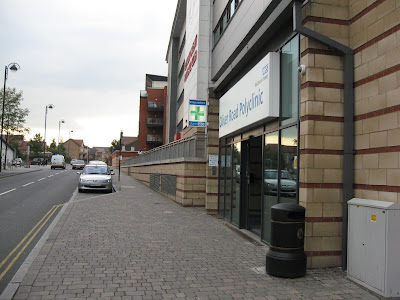 There's ample room for cycle stands, is there not? But the nearest place to lock a bike is that traffic sign pole by the parking bays.

Sir George is a big cheese in the National Health Service. But, like a lot of people who run the NHS, I bet he doesn’t cycle to work, or ever rides a bicycle – except, perhaps, to stash one on the back of a 4X4 and head off to a CenterParc or some nice converted railway line in the countryside.

There is ample space for cycle stands on the very wide pavement outside, but no one in the NHS or the local council has given the matter a moment's consideration. (Yes, there are stands up the road, on the other side, by a different NHS building, but that's not the point.)

The Polyclinic was opened last year by Ben Bradshaw, then a Minister of State in the Department of Health. He blathered

"Oliver Road Medical Centre is a great example of how PCTs are working to bring services together, in great buildings, nearer to where people live.

Bradshaw obviously didn’t notice the complete absence of cycle stands. Apparently, neither did this collection of people, who were present on that great occasion:

The person standing to the left of Sir George in the first photograph is Cllr Afzal Akram, Chair, NHS Waltham Forest. The current issue of the Council’s free newspaper features Cllr Akram promoting Change4Life (yes, that crap). He is shown promoting 'a virtual bike race' - which for all I know is the nearest he ever gets to a bicycle.

If you have an NHS clinic near you which lacks cycle stands, you could always draw attention to this post, add some comments of your own, and email Sir George Alberti at this address:

I think both of them have some explaining to do.

Such as why they think the total absence of cycle parking outside the Oliver Road Polyclinic is acceptable.

Such as why Chingford Health Centre has free parking for cars and not a single cycle stand.

Such as why Whipps Cross Hospital is a car-sick institution which has parking for 1100 cars and just 16 totally inadequate cycle stands.

Such as why surgeries and NHS clinics across Waltham Forest have car parking but not even a single cycle stand.

Let me summarise. The NHS is a diseased, car-sick institution, run by drug addicts in thrall to oil and car dependency.
Posted by freewheeler at 08:49