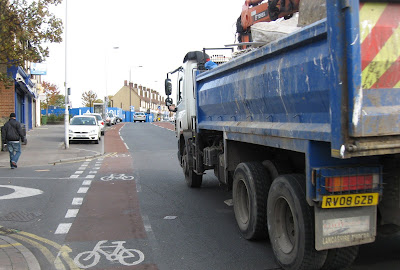 Jenny Jones, one of the two Green Party representatives on the Greater London Assembly, keeps hammering away at this point

The target of a million new cycle trips by 2026 can only be achieved if we improve cycling infrastructure in outer London.

Transport for London estimates that cycle hire and cycle superhighways will produce an additional 160,000 new cycle trips per day between them.

The nineteen Outer London boroughs currently have an average modal share of one per cent for cycling (although there are some significant variations).

To meet the Mayor's target each of these boroughs would require, on average, an extra 44,000 cycling trips every day. Which might be interpreted as requiring 44,000 new cyclists.

The London Borough of Waltham Forest is a fairly typical outer London borough in so far as it has an unchanging modal share for cycling of one per cent.

These are the cycle count figures for one of the most popular routes in Waltham Forest, namely Forest Road (A503). This is a strategic commuter route.

(Moving the counts from October to July was plainly an attempt to improve the statistics by switching to a month which probably has one of the highest levels of cycling, since cycling rates are partly influenced by weather.)

Towards the end of last year this notice appeared in the council newspaper: 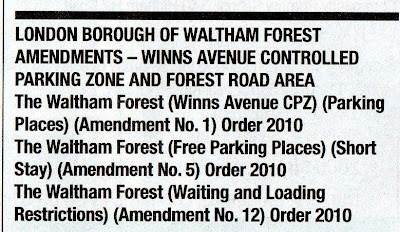 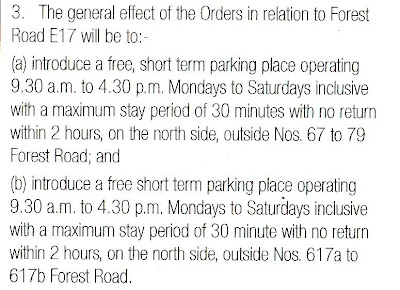 The first photograph below shows numbers 67-79 Forest Road, and the second one shows 617a-617b (the blue fish and chip shop and the yellow tile shop). The term 'parking place' in the traffic order is a little misleading as it involves possibly around 10 parking bays at the first site and possibly 4 at the second. 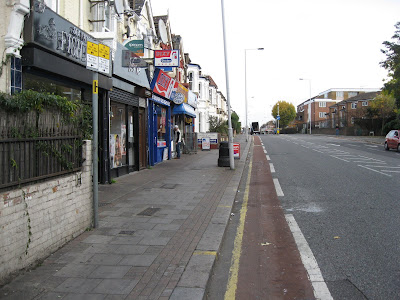 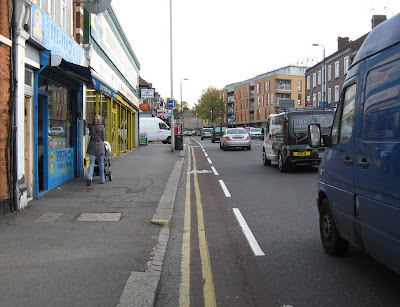 This photo shows the junction immediately before the planned bays at 617a-617b. (Incidentally, the council used to boast about how the red cycle lanes ran across this junction, but when they faded they were never renewed.) 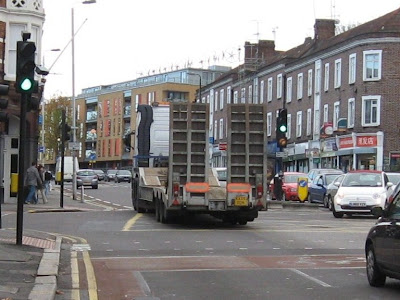 The latest traffic order is simply the latest in a series of systematic reallocations of road space for free car parking, dating back to 2007. In all previous cases the cycle lane has been moved, to relocate cyclists from kerbside cycling lanes to a new position between parked motor vehicles and overtaking motor vehicles. At both the sites shown below drivers regularly exceed the 30 mph speed limit. 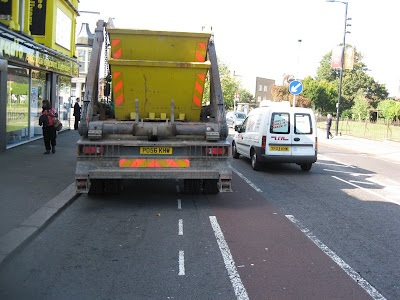 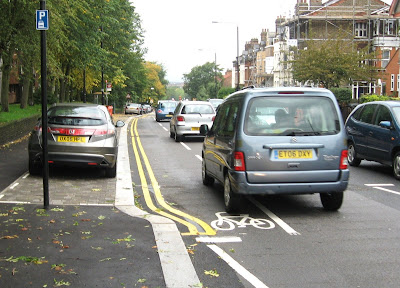 Such are the conditions on what is one of the most popular cycling routes in the borough. The idea that cycling will significantly increase on Forest Road and that an outer London borough like Waltham Forest will generate 44,000 additional daily cycling trips by 2026 might well be regarded as optimistic. That's almost 3,000 daily trips extra every year over the next 16 years.

In one sense a shift to a 5 per cent modal share for London is a deeply unambitious target. But in another sense it strikes me as being an incredibly ambitious target if the Mayor's postulated increase in cycling is to come in outer London.

The London Borough of Waltham Forest already has what many cycling campaigners elsewhere still dream of - area-wide 20 mph zones, extensive traffic calming, an extensive network of cycle lanes, road closures with cycle access and signed 'quiet routes'. This, I suspect, is what Jenny Jones means when she talks about 'infrastructure' (she is not alluding to the Dutch template because the Green Party is firmly committed to vehicular cycling and the notion of the bicycle as a vehicle which has equality with cars, lorries etc).

But none of this vehicular cycling infrastructure in Waltham Forest is effecting a shift to cycling in any significant way.

One reason for this might be the fact that almost all local cycling has to be done in close proximity to parked motor vehicles and to moving motor vehicles. As far as moving motor vehicles are concerned, the roads have significant numbers of drivers who speed, jump red lights, emerge from side junctions without due care and attention, approach at speed on the cyclist's side of the road on narrow 'quiet routes', talk on mobile phones, and become resentful and impatient when they find themselves behind a cyclist (the resentment being expressed in various ways from aggressive tailgating to the blowing of horns, dangerous overtaking, or screamed obscenities).

Waltham Forest is also very well served by public transport. The Central Line serves Leyton and Leytonstone, the Victoria Line serves Walthamstow (which has two stations on the line), and Chingford has reasonably fast trains to Liverpool Street station in the City of London, departing every 15 minutes, and also connecting with the Victoria Line. The borough also has a very comprehensive network of bus routes.

Vehicle ownership continues to rise, both in terms of households owning more than one vehicle, and non-vehicle-owning households acquiring their first car.

The notion that cycling is going to grow substantially in a borough with substandard cycling infrastructure, on roads with high volumes of traffic, where significant numbers of drivers are flagrantly flouting road traffic law, driving without due care and attention, or are actively hostile to the presence of cyclists, strikes me as unduly optimistic, especially in a borough which also happens to be very well served by public transport, and where car ownership continues to grow.

Cycling will only increase to the extent that people can be persuaded to take up vehicular cycling in conditions such as the ones regularly illustrated on this blog. That those numbers will ever be very large seems to me unlikely. And in the case of Forest Road, a likely contender for a future 'Cycle Superhighway', even the conditions for vehicular cycling are being significantly worsened by the council's unending desire to reallocate more and more street space for free car parking.

But not to worry. When 2026 comes around and London languishes with a modal share of, at best, 3 per cent, all this will be forgotten. An exciting new target will then be set up for 2050 and everyone will be very happy.
Posted by freewheeler at 12:30