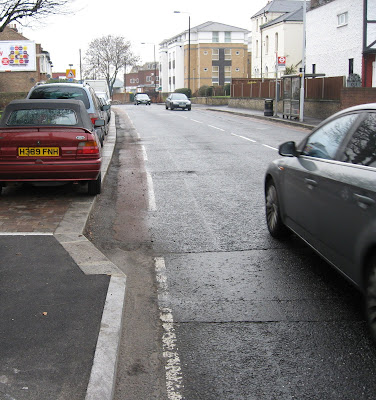 ‘It is intended that Walthamstow will become an exemplar for sustainable living.’

As can be seen from this exciting new traffic scheme on Wood Street, which involves converting the cycle lane to free parking bays at a cost of just £450,000. This is what’s left for cyclists. 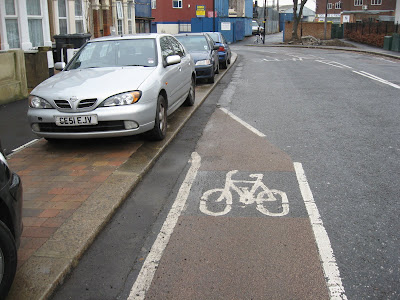 At War With The Motorist has a good post with lots of useful links regarding London boroughs’ Local Implementation Plans. It’s well worth using formal channels when they are made available to all.

There is the cruel throwaway remark:

I also searched for Waltham Forest, for a laugh, but they too have nothing obvious available for comment so far.

Strictly speaking, that’s not true. Until 28 February anyone can comment on the borough’s Local Development Framework, which you can find out more about here:

The Core Strategy lies at the heart of the LDF and provides the strategic vision, objectives and policies for the Borough up to 2026.

The LDF is not a transport document but addresses the broader issue of development, which includes transport and ‘sustainability’.

The LDF draft describes the borough and includes statements of the bleedin’ obvious, such as the fact that the North Circular road ‘creates dead ends and a disrupted street network’.

The high pedestrian flows on Hoe Street are noted but needless to say the council’s indifference to street clutter isn’t. This takes the form both of obstructive street furniture and shopkeepers’ ‘A’ boards. The council has absolutely no interest in addressing either problem and declines to enforce legislation which protects walkers. When winter comes and the snow falls the council grits roads but it does not grit pavements or off-road cycle paths including cut-throughs at road closures.

Nor does the council measure walking, so although it might be true that ‘Each year more people choose to use public transport, cycle or walk in and around the borough’ the council has no real way of knowing and the consultants provide no data in support of their bland generalisation. The borough’s population continues to expand, so there probably are more people for all transport modes. Including driving.

What’s more the consultants who produced this report plainly have no first-hand knowledge of the borough (reducing its cultural heritage to David Beckham and William Morris is superficiality of the first order).

They have also plainly interpreted Waltham Forest through a car windscreen. Ironically the ‘Core Vision’ is itself imbued with car-centrism: ‘The Lee Valley is extremely hard to access’. Not on foot or by bicycle it isn’t.

Tackling Climate Change evades transport altogether and concentrates on matters to do with buildings and property development. Making Transport Improvements naturally ignores cycling altogether and focuses only on public transport and motor vehicles. There are some empty platitudes about Sustainable Transport.

The reality as far as ‘Sustainable Transport’ is concerned is that cycling has been stagnating for decades with a modal share of one per cent. Waltham Forest’s shanty town cycling infrastructure has been comprehensively recorded on this blog. The claim that ‘Each year more people choose to use public transport, cycle or walk in and around the borough’ has to be set against the alternative reality that every year more households in Waltham Forest acquire a first motor vehicle or an additional motor vehicle.

As for walking. The council doesn’t measure walking and is contemptuously indifferent to pedestrians. The borough’s complex network of rights of way and public footpaths is comprehensively neglected and has been for years – unmaintained, unsigned, a shabby underworld of filth and abandonment.

As for public transport. The service on the Central Line is mediocre (overcrowded trains and regularly disrupted services) and the Victoria Line has gone from being one of the best tube lines in London to being the one which attracts the second highest level of passenger complaints.

There’s a total disconnect between how the council actually treats walking and cycling and aspirational eco fluff like this:

4.21 It is intended that Walthamstow will become an exemplar for sustainable living with daily needs being met within the town centre, removing the reliance on cars and increasing the opportunities for social interaction and the development of community cohesion.

Which is a crock of shit, bearing in mind that Walthamstow is a car-sodden, car-choked mess, deeply hostile to cycling, where car-centric urban planners have a limitless appetite for on-street car parking and are obsessed with ‘smoothing motor vehicle flow’ by creating scores of one-way streets which are obstructive to cycling permeability and also create one-way metal sewers where there is no safe space for drivers to pass cyclists, resulting in friction between the two road user groups. 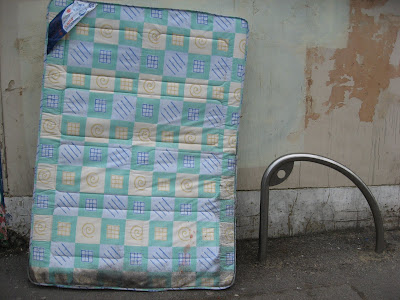 There’s also the hilarious delusion that Wood Street can become a ‘growth area’, attached to some truly incredible garbage about ‘encouraging walking and cycling to and from and within the Wood Street area’. It’s as if the new £450,000 scheme to seize the cycle lanes and footways of Wood Street for car parking didn’t exist – cognitive dissonance on a truly epic scale.

‘Modal shift towards sustainable modes of transport will be encouraged and car parking will be rationalised.’

It will be encouraged through words, idle words – not budgets, infrastructure or restraining car ownership or use.

And quite what ‘car parking will be rationalised’ means is anyone’s guess. Perhaps putting tarmac over Lloyd Park and making it into a car park for a park and ride scheme.

Car-sick Waltham Forest has also cut its own throat, because just up the road, in September, in the adjacent London Borough of Newham, Westfield Stratford City is opening. This claims to be the largest urban shopping centre in Europe and it will have the kind of stores that Waltham Forest signally lacks: John Lewis, Marks & Spencer, Waitrose, as well as a 14-screen cinema. It will also have parking for 5,000 cars.

Westfield Stratford City will suck the disposable income out of Waltham Forest, leaving it with its true core heritage – betting shops, charity shops, discount stores selling goods at a pound each, and small independent high street shops selling goods which are more expensive than you’d pay in a supermarket. The London Borough of Waltham Forest has no cinema, no theatre and no shops anyone from outside the borough would ever bother to want to come here for. It has a rich cultural heritage which successive philistine councils have dismally failed to exploit (the demolition of Alfred Hitchcock’s birthplace to make way for a garage is very hard to beat). The council meanwhile is busily selling off public land and property for dodgy developments which have engendered furious local opposition. The council is simultaneously indifferent to green space and keen to make motoring cheaper. In short, those tens of thousands of people who use their cars to drive very short distances will continue to do so, and since the vast majority of those drivers will never have been near a bicycle they will drive in such a way that intimidates the tiny, brave minority of vehicular cyclists.

(Below) Wood Street, where the LDF has a glowing vision of ‘encouraging walking and cycling to and from and within the Wood Street area’. 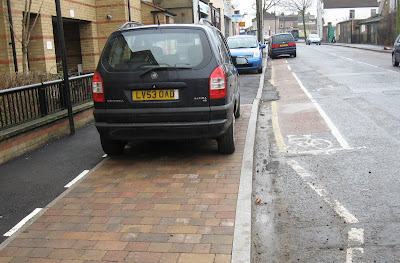 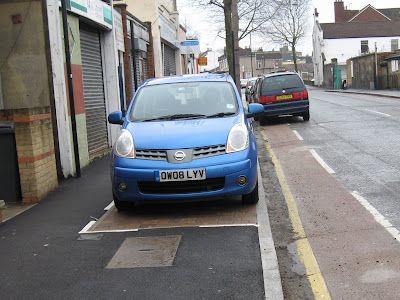 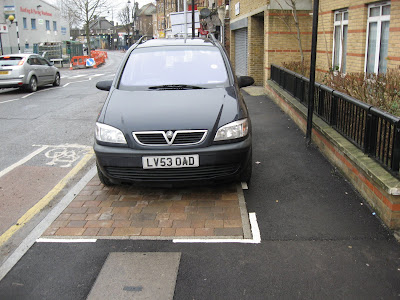 Posted by freewheeler at 13:59