Blaming children for being hit by cars

Because roads are for cars, not kids. And kids - it’s YOUR responsibility to watch out for motorists. They have an absolute right to drive through your neighbourhood how the hell they like. And don’t you forget it.


(Below) Crazed children hurl themselves in front of an early motorist. 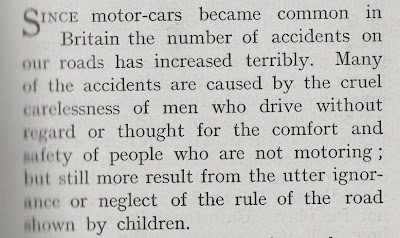 Sadly, some people still persist in walking their children to school.

THE MOTHER of a six-year-old who is still in hospital four weeks after being run over outside his school, has demanded that Redbridge Council enforce its parking restrictions.

[There’s no danger of that happening. I’ve tried. And in the highly unlikely event that car-centric Redbridge Council did suddenly declare war on the motorist there would be no need to worry because help is at hand.]

Hector Beck suffered a broken leg when he was hit by a car outside Aldersbrook Primary School in Harpenden Road, Wanstead. Mum Kate, 38, was walking him to school with husband Allen, 49, and four-year-old son Bo, when a driver started reversing.

Recalling the crash, she added: “As she started reversing, in the split second before she hit Hector, my husband was banging on her window but it didn’t make any difference.

Last year parents at both Woodford Green Prep School, and at Our Lady of Lourdes Primary school in Wanstead urged the council to crack down on drivers flouting parking restrictions outside schools.

called on drivers using nearby roads to slow down

The event at Longshaw had added meaning for Kathleen Sheehan, 28, of Connnigton Crescent, and her six-year-old son Sean Lacy. In February last year, Miss Sheehan watched in horror as her son was hit by a passing car outside the school as he stepped out into the road to meet her.

She said: “It was horrific. I saw the car coming so I knew it was going to happen, but couldn’t do anything to stop it. He fell on to the bonnet and then under the car and was run over. It has been nine months since it happened and I still have flashbacks and nightmares.

“He is quite strong, but I haven’t got over the trauma of seeing my own child get run over. Both of Sean’s collar bones were broken, as was his left shoulder blade. His right leg, which was snapped in half, is still being held together by metal plates and he spent months in a wheelchair. Sean’s lung burst during impact and he was blind for five days after the accident.

And now there’s this:

An eight-year-old boy was knocked down and killed after two garage workers who were supposed to be fixing a £70,000 Porsche allegedly took it for a ride.

Ryan Fleming, from Heybridge in Essex, died after he was mown down by a silver Porsche 911 Carrera as he crossed the road with a friend.

The 31-year-old driver and 18-year-old passenger in the powerful sports car were, it is claimed, workers at Kwik Fit garage, where it had been dropped off by its owner to be fixed.

A 17-year-old who works close to the accident scene has told detectives he saw the Porsche pulling out of the Kwik Fit garage and performing a 'wheel spin' in front of another car moments before the crash.

If you are going to challenge the blood-drenched, victim-blaming ideology of ‘road safety’ it helps to be acquainted with key texts of the critical opposition.
Posted by freewheeler at 14:23