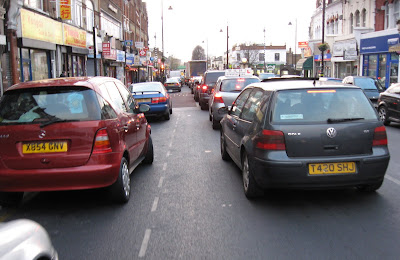 Since the early 1990s there has been a steady increase in the use of cars and a decrease in walking and cycling to school or to work in Great Britain.

How do we get more children cycling? Lots of parents won't send their children to school in conditions like those shown above, yet it is perfectly safe to cycle in London, very relaxing and also very good for your health.

Redbridge branch of the London Cycling Campaign has some marvellous tips for helping children learn to cycle in a safe environment. Why not start them off at City of London cemetery, Aldersbrook: 6 miles of tarmac paths

You can tell them that the nice grey ladies with long hair and stone wings will look after them in heaven if they happen to meet a reckless lorry driver while cycling to school!

Ian Aitken (CEO, Cycling Scotland) told a recent conference of cycling campaigners that the situation was a bit mixed north of the border:

There was a "Cycle Friendly School" award and a “Give Me Cycle Space” campaign. 80% of Scottish schools had a Travel Plan, and 134 had cycle parking. Yet many “mums‟ still regarded cycling as too dangerous.

E Lothian – tackle fears of mothers. Poster with message to drivers – ''give me space'.

We don’t need safe segregated cycle paths, all we need is for drivers to be nicer:

Cycling Scotland’s Andrew Pankhurst told BikeBiz: “The main barrier to cycling to school is that parents need to feel that cycling is safe for their children. That’s why we are running this campaign to communicate with drivers, asking them to be cycle-friendly, and to give children enough cycle space.

The six-week campaign will see the creation of ‘Cycle Friendly Zones’ around schools where drivers are asked to give children as much space as possible while they are cycling – directly tackling the concerns of worried parents. Orkney, Moray, Edinburgh, Glasgow, North Lanarkshire, East Dunbartonshire and East Renfrewshire will benefit from the campaign.

Communicating with drivers will include outdoor advertising, advertising on local radio and leafleting to parents.

It is the view of this blog that these initiatives do not go far enough.

Welcome though they are, it’s time for a more radical approach.

So let me ask one simple question: how many children do you know who were killed or injured last year when their mothers used them for knife-throwing exhibitions?

I expect the answer is none. Yet many parents have probably got it into their heads that for a mother to throw knives at a child is dangerous. This is nonsense. With a little ‘knifeability’ training any mother can safely throw knives at her children.

Yet, incredibly, there has been a huge drop in the number of mothers prepared to make a little extra household income by throwing knives at their children for the entertainment of onlookers in a local field.

The statistics show that it is perfectly safe to throw knives at children and that, equally, it is perfectly safe for children to cycle to school. This is why more public information like this should be made available to ill-informed parents who suffer from irrational anxieties about their children's safety.

Posted by freewheeler at 21:25