Rejoice! For the London Borough of Waltham Forest Local Implementation Plan (or LIP) has at last crawled forth into daylight. As yet the council does not seem to have made it available online. But not to worry. You could always try one of the local libraries. Like this Walthamstow blogger:

I asked if I could see “the definitive map and statement for the boroughs public rights of way” (“please”). Both ‘points’ consulted the online oracle and were equally puzzled as to what and where this document is. The librarians suggested I come back and ask some other librarians.

Much more about the LIP shortly. Crack teams of experts here at the Krapp Institute are subjecting the LIP’s stated aim of ‘encouraging cycling’ to rigorous critical scrutiny, and our report will be out in a day or so. Before that we shall expose a Town Hall car dependency scandal. But for today, as a small musical prelude to a thunderous symphony, let us consider section 3.4.7, entitled ‘Greenways and new cycle schemes’.

Waltham Forest’s LIP was developed in consultation with, among other organisations, SUSTRANS. Basically, the Sustrans ‘Olympic Greenways’, which were quietly shelved a couple of years ago, have once again been brought out into daylight, dusted down and reinvented for the LIP.

This blog post will deal with one such ‘Greenway’ identified in the LIP, which is to be ‘developed and upgraded’ and which will ‘expand and enhance cycle infrastructure’ in Waltham Forest. And this particular one leads to the Lea Valley, wherein is to be found that distant, legendary Shangri-La known as ‘the Upper Lea Valley Opportunity area’.

But enough talk. Let us begin our epic journey down this Greenway, which is marked on the map on page 58 of the LIP.

In the east, this LIP Greenway begins at the idyllic Crooked Billet underpass (where the North Circular Road meets the A112 and the B179). What local cyclists think of this much-celebrated facility is indicated by the annual cycle counts for the period 2006-2010, which, over the period 7 am-7 pm, on a July day, are 309, 324, 294, 223 and 228. This indicates a trend. Which is a shame as there is so much to see and enjoy at the Crooked Billet. Take this intriguing structure, for example (below). A solitary running shoe amid the detritus in the foreground hints at an untold story. And what lies inside the darkness of those slightly open doors? The entrance to the magical land of Narnia? Or simply a decomposing corpse? 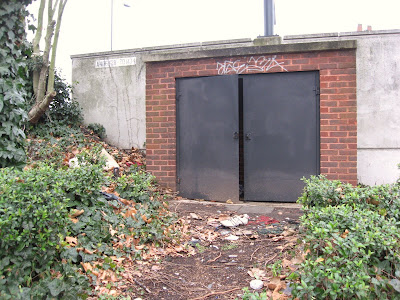 But now it’s time to set off down the Greenway. The first part of the Greenway runs south of Billet Road on a new cycle path which has previously been celebrated on this blog. (Since that post it's been slightly extended, by the ingenious device of painting a white line down the middle of the relatively narrow pavement.)

Follow it to the end, cross Billet Road – do remember your Green Cross Code as the drivers are going much faster than 30 mph! – and go to the end of the cul de sac to the right of the new Academy (i.e. what used to be known as The McEntee School). You will be greeted by that essential design feature of every exemplar SUSTRANS route – a barrier. But there's access in the mud at the side for cyclists, so not to worry. 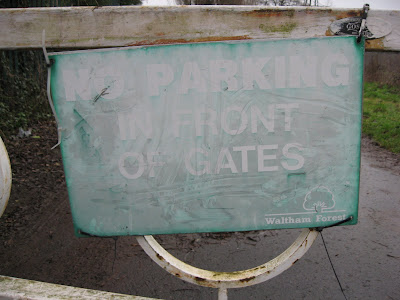 Here the route really comes into its own. The suburbs fade and rural life takes over, rich with glimpses of overgrown, derelict buildings, strange motionless horses, and a supermarket cart mysteriously enclosed on all sides by metal fencing. This simply reinforces the general theory that

Tarkovsky’s Stalker seems to be a parable about the London Borough of Waltham Forest. It is set in a wilderness area full of decay, where the normal laws of physics no longer apply. 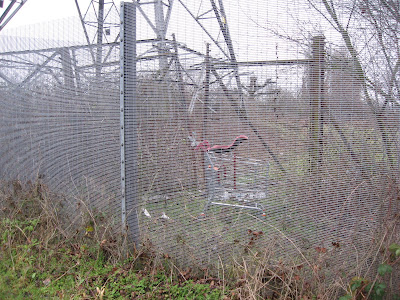 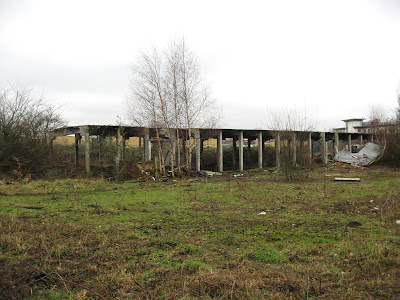 At the end of the path you meet another one, entirely lacking in direction signs. But as local psychogeographer and artist Julian Beere observes, this is not all that unusual in the London Borough of Waltham Forest:

Some of the paths appear unsigned, nameless; nowhere between somewhere or other - liminal passages.

In fact you need to turn left here, if you are following the Greenway route, which runs behind the Academy playing fields. As you can see, the width of the path here makes it highly suitable for two-way family leisure cycling shared with dog walkers. Who can doubt that this will become a veritable 'Camel Trail' for North East London? 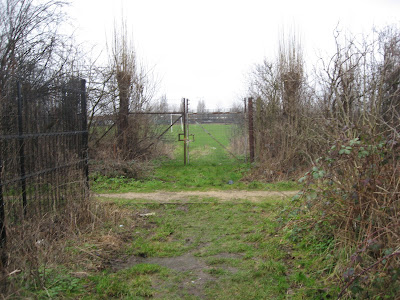 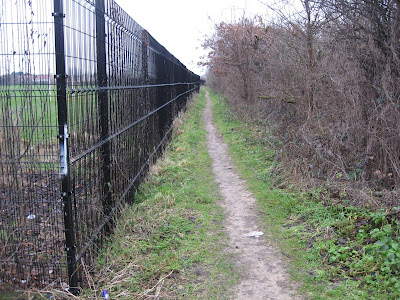 Before long you will encounter the delightful entrance to another public footpath, this one leading off south back to Billet Road. Naturally it’s unsigned. If you plan on leaving the Greenway here please note that experience in wading through toilet seats is an advantage. 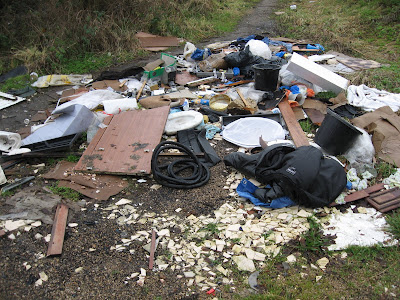 And this (below) is where this Greenway route eventually terminates, where it meets the aptly named Folly Lane.

More flytipping (the CCTV stalk nearby has the camera missing) and the entrance is coated in hundreds of tiny pieces of broken glass. This route has been identified by a top man at the London Cycling Campaign as ‘a hidden treasure’, proving once again that the LCC has a shrewd understanding of how to get more people cycling. 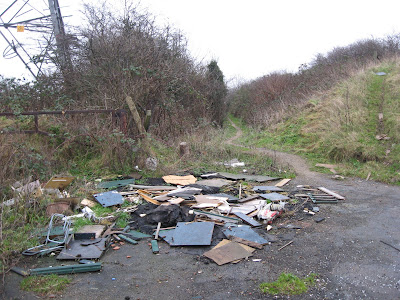 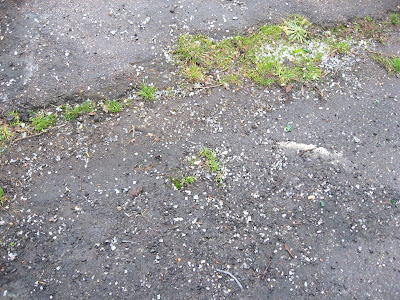 You emerge on to a lush green plateau containing this enigmatic artefact (below). Is it an extra-terrestrial taking a nap or simply her space module?

All I know is that next moment there was a blinding flash and I woke up several hours later to find myself back at the Crooked Billet, with my bike computer mysteriously frozen at the time I left ‘the Tarkovsky trail’. 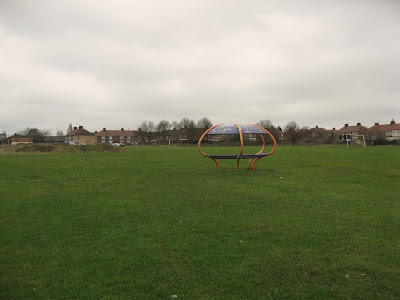 Posted by freewheeler at 15:57