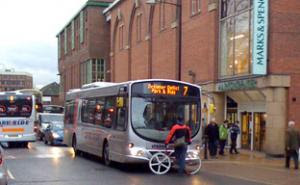 We need a lot more of this:

A CYCLIST blocked a York city centre street today when he staged a one-man protest in front of a Park & Ride bus.

The cyclist blocked the bus’s progress in Piccadilly for at least five minutes, causing a traffic jam to build up behind, said eyewitness Tim Stark, who took this photograph.

He said the rider was engaged in an argument with the driver of the bus, which was carrying passengers from the Designer Outlet at Fulford. Neither the cyclist’s identity nor the reason for his protest is known.

I think I can guess the reason for the protest. In my experience the bus driving community is not exactly short of morons who don’t understand the first thing about cycling. The thing I really hate is when a bus is waiting at a bus stop with the left indicator flashing and I’m half way past it when the driver suddenly accelerates.

Though to be fair to London bus drivers I have never seen one on a mobile phone. And if I do I shall imitate York’s heroic cyclist. Until the cops arrive and arrest me.
Posted by freewheeler at 20:02