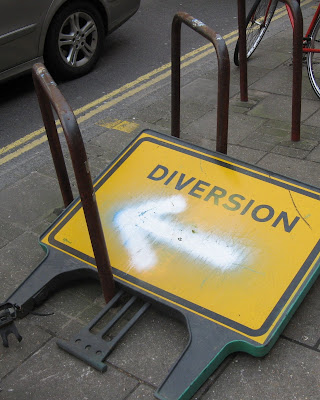 Let’s first of all be precise about what ‘Strict Liability’ means. It is often misinterpreted as referring to criminal law, meaning that responsibility for a crash is attributed by default to the least vulnerable road user, i.e. in a collision between a car and a cyclist the car driver would automatically be held responsible. In fact in European law it has no such meaning. Rather, it refers to civil law and has no relevance to criminal law whatsoever. Its application largely relates to insurance and makes road users liable to compensate for any injuries arising from the use of their vehicle on the road, whether it is a car or a bicycle. Under Danish law a car driver who hit a cyclist would be held liable by the driver’s insurance company. However, if the driver was not charged with a criminal offence and the cyclist was held to be at fault the insurance company would seek to be reimbursed by the cyclist. As David Hembrow has said: It's an insurance thing. It places the onus on the hitter's insurance company to prove innocence rather on the victim's insurance company proving the hitter is guilty. There's nothing at all wrong with the principle and it's more desirable to have it than not have it. But it has nothing at all to do with driver behaviour and will never bring about mass cycling in a vehicular cycling society where most drivers have no experience of riding a bike.

As for the world’s most successful cycling state. David Hembrow makes three points:

(ii) Most Dutch people I've mentioned this to are unaware of the legal difference, and there is no simple phrase (like "strict liability" in English) to describe it. That's how conscious the Dutch are of this law. It's certainly not something which comes to the forefront of every driver's mind when he sees a cyclist.

(iii) A change to the legal liability will be extremely hard to achieve when the majority are not cyclists and don't understand about cycling. This is what you're seeing from the rabid responses of the Daily Mail and others.

But leaving aside the fact that Strict Liability legislation was NOT a key factor in enabling mass cycling in Denmark and the Netherlands, there’s another proof of the fundamental irrelevance of Strict Liability as far as promoting cycling is concerned.

Ontario in Canada has a version of Strict Liability enshrined in law:

What effect has this had on rates of cycling? None whatsoever.

Work-related cycling trips make up approximately 1% of all work-related trips in major urban centres in Ontario, lower than Quebec and every province to the west. Modal split rates for major Ontario cities vary from around 2% for Kingston and Ottawa to about 0.5% for Oshawa and Sudbury.

Cycling blogger Clive Chapman wrote to his MP asking for the enactment of a Strict Liability law. The reply he got from the transport minister states:

the evidence from the Think evaluation and other research suggest that driver behaviour change is more likely to be motivated by serious personal consequences, whether it be death or injury to themselves or others, or criminal punishments such as loss of their licence or imprisonment, than they are by any insurance issues.

In this instance I think Norman Baker and the Department for Transport are right.

‘Strict Liability’ is popular with Britain’s vehicular cycling campaign organisations because it’s yet another way of evading the key principle of segregating cyclists from motor vehicles. It’s another red herring, along with ‘Share The Road’, ‘Three Feet Please’ and campaigns to make cycling a part of the driving test (because the driving test is so effective at making drivers safe drivers in later years innit). It’s just a diversion, along with all those many other campaigns designed to persuade non-cycling drivers to be nicer to cyclists.

What is depressing about Britain (apart from this, obviously) is that the entire cycling campaign establishment still doesn’t get it. Whereas in Ontario they do. And no mention of ‘Strict Liability’ at all:

The number one reason people do not ride bicycles is because they are afraid to be cycling on the road amidst traffic, i.e. they have a fear of drivers of motor vehicles. This fact has been documented in transportation literature reporting on studies, surveys and conversations cross the Canada, the US and Europe. Creating an Ontario where more and better bicycling for transportation and recreation occurs will require addressing concerns about personal safety and comfort.

(Below) A very British cycle lane. 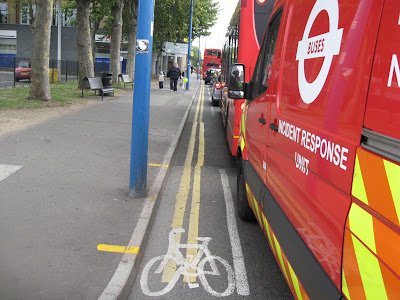 Posted by freewheeler at 21:23