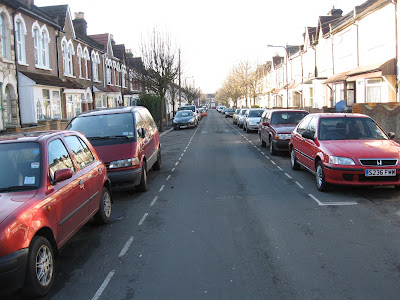 This is Glenthorne Road E17, westbound. It’s a permeability route for cyclists heading out of central Walthamstow into the Lea Valley. Glenthorne Road is a de facto one-way street eastbound because it’s NO ENTRY for motor vehicles from Blackhorse Road (A1106). Cyclists have dedicated lights at the junction and cycle access into Glenthorne Road. However, they are cycling against motor vehicle flow on this road. Traffic flows are light as this is a residential area and Glenthorne Road is not a rat run.

However, it is not a particularly pleasant road to cycle down if you meet a motorist, because I have yet to meet one who stops. They simply drive at you head-on and expect you to move to one side, so that if there isn't a gap in the parking you are sandwiched between parked cars and their ton of metal. Speeds may be low – 10 or 15 mph – but it is still intimidating. I have often wondered if some drivers realise that cyclists are allowed to go the ‘wrong’ way, since there is no signing to advise drivers, let alone any that requires them to give way to oncoming cyclists. 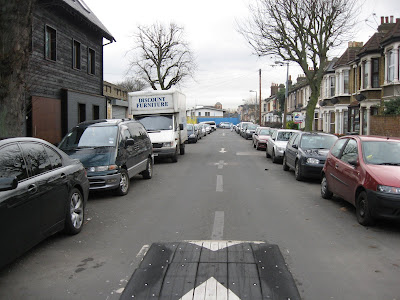 My photo shows Rosebank Road E17 looking south. This is still erroneously marked as a two-way cycle route on the most recent published edition of the TfL Local Cycling Guide 4 (2010/2011). In fact some four years ago the London Borough of Waltham Forest decided to convert both Rosebank Road and Russell Road into one way streets. No consideration at all was given to the reality that these two streets form part of a marked cycle route connecting Walthamstow and Leyton.

Whereas cyclists were once able to cycle south along Rosebank Road and Russell Road, and then cross the A104 into Bickley Road E10, this option has vanished. An important link in the thread of a back street ‘quiet route’ has been removed, purely in order to accommodate smooth motor vehicle flow on streets which have now reached saturation point for free on-street car parking. Ironically Rosebank Road is if anything a little wider than Glenthorne Road.

Meanwhile the London Cycling Campaign and Sustrans cuddle up to Transport for London and collaborate on cycling documents which put forward the fantasy that cycling will grow in Outer London. The reality is that even at the rudimentary level of vehicular cycling things are getting a whole lot worse, and they are getting worse because both TfL and the London Borough of Waltham Forest share the same priority: putting motor vehicle flow and motor vehicle parking at the top of the hierarchy of provision.

And for those still prepared to cycle on these car-sodden streets, evolutionary strategies (i.e. subversive and unofficial cyclecraft) are required to compensate for car-centric transport planning. Like the cyclist below, who simply ignored the NO ENTRY sign and followed the route which cyclists were allowed to follow until it was stolen from them by Waltham Forest council. 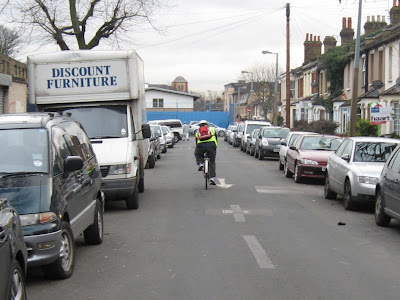 Posted by freewheeler at 14:40