Cycling: it’s getting worse, not better 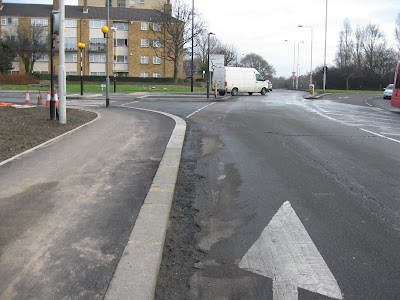 Well it is in the London Borough of Waltham Forest. Look carefully and you’ll see that the faded pink cycle lane in the foreground has been gobbled up by some rather pointless footway widening (pointless because pedestrian flow here is relatively low and in any case the footway could have been widened on the other side, not by the kerb). A white arrow advising drivers to pull over to the right is contradicted by the road lay-out just ahead, which requires them to pull over to the left. This section of road is the eastbound A104 approaching the junction with Wood Street E17 (B160).

And note that having widened the footway, the resulting road conditions for cyclists are of the shantytown variety. 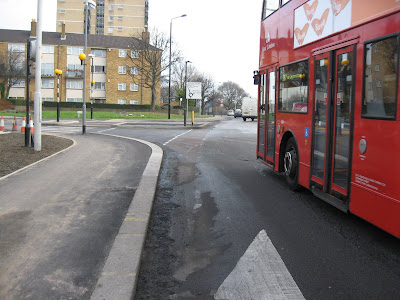 Worse, the island in the middle of the junction ahead has been extended into the cycle lane. This narrows an already crap and inadequate cycle lane while leaving the rest of it in its original width, which means an overtaking driver is going to think a cyclist has more space than they really do. The traffic island build-out is very, very dangerous indeed. 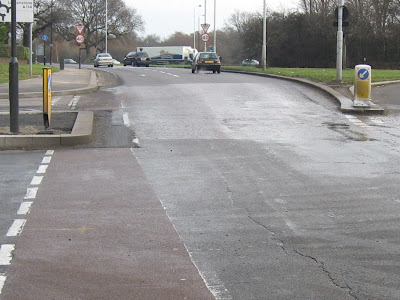 Even by the very low standards of the existing vehicular cycling infrastructure, this is a lethal design that actually makes the road more dangerous for cyclists. And it’s not the first time that Clyde Loakes ate my cycle lane.

This is all part of the £450,000 scheme to create more parking on Wood Street. I spotted the dire consequences of this when I went past the other night – cars parked in the cycle lane, alongside cars parked in the new on-footway parking bays, and a third car parked on the footway. Triple-width car parking. Utter lunacy, and all done in partnership with the London cyclist’s and pedestrian's number one enemy, Transport for London. 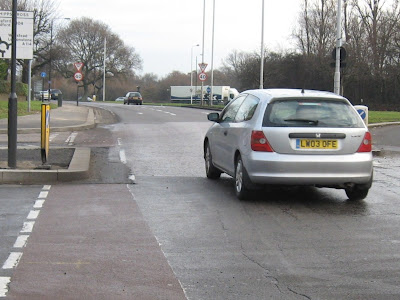 Posted by freewheeler at 21:15