Why segregation is the answer on Markhouse Road (A1006) 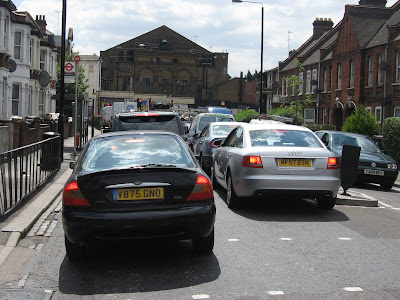 If you cycle southbound on the A1006 (Markhouse Road E17) this is the scene that regularly greets you at the junction with the A104 (Lea Bridge Road). It gets much, much worse than this during the rush hour. There’s a cycle lane under those cars in the kerbside lane but it’s ‘advisory’ (i.e. useless).

The ‘vehiculars’ are always arguing that Dutch-style segregated infrastructure would slow them down, whereas on-road cycling is much faster. This is not a persuasive argument on London roads like this one (and as far as the Netherlands is concerned it’s not true).

What should be done here? The answer is obvious. Segregation. Take away that kerbside lane from motor vehicles and reallocate it to cyclists. Physically segregate it with a barrier. You can run a segregated cycle path all the way from Boundary Road to the A104. In fact there’s space to run a southbound segregated path all the way from Queens Road (there’s currently already a bit of crappy British-style off-road path in one section).

Cycling discussion threads are full of assertions like these:

A road is a road is a road, open to all classes of user. Once you create a separate cycle lane you are implicitly creating a car lane out of the remainder of the road, with the idea that this belongs to car drivers and not to cyclists or pedestrians.

In many locations there simply isn't space for good quality segregated provision.

In reality segregated cycle paths are both perfectly practical and highly desirable. Who would want to cycle in the remaining carriageway with all the cars once you had a wide, safe cycle path to Dutch standards? How many people currently want to cycle in traffic conditions like these? Very few.

Obviously as things stand Transport for London would veto any such proposal, because it has overall control of London's main roads and its top transport planning priority is managing motor vehicle flow:

TfL is basing all its decisions about junctions and road layouts on models that only account for cars. If people switch from cars to bikes or to walking, well, that doesn’t count.

A scheme such as the one outlined above would obviously double the length of the traffic jam. It would cause additional congestion. Except that the congestion is first of all caused by people choosing to use cars for short journeys which could easily be cycled. But they aren’t going to cycle those journeys as long as the infrastructure is planned around their needs before those of cyclists or pedestrians. This is why we need

to simply stop looking at London's road space as something that is entirely modelled around car use. We're never going to get people out of cars and onto their bikes if the only measure of success is how much impact a scheme has on motor traffic.

The re-allocation of street space away from the motor vehicle is the secret of civilising London for everyone, and also the only way we are ever going to get a mass cycling culture. And the Dutch turned their transport culture around by first of all building segregated bike paths on strategic main roads like these. Bike grids were how it all started (not 20 mph zones or Strict Liability or all those other features which many British cycling campaigners are keen to cherrypick from the Dutch model while ignoring both the basics and the transport history).

But I was forgetting. It would obviously cost billions of pounds to insert a kerb in the carriageway and paint it yellow, like here. 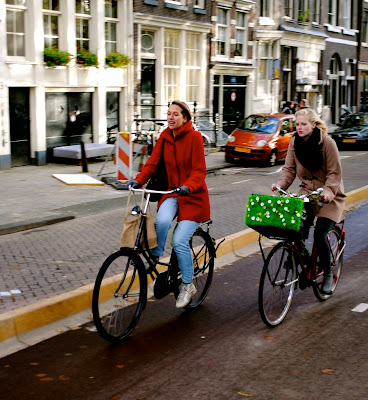 Posted by freewheeler at 21:38