20 mph zones are obviously desirable to anyone apart from a petrolhead and they are generally very good at reducing fatalities and serious injuries among pedestrians and cyclists. Area-wide 20 mph zones are also preferable to 20 mph speed limits on isolated streets. That said, where is the evidence that they encourage an increase in cycling?

Is speed reduction the key factor that will encourage non-cyclists to take up cycling?

Or to put it another way, the goal of 20 mph for residential streets provides

the “golden opportunity” for those campaigning for a more equitable sharing of roads for the benefit of vulnerable road users.

Consider for a moment pedestrians. Here is a street in an area-wide 20 mph zone in Waltham Forest: 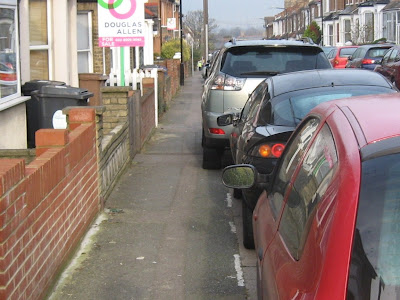 The introduction of a speed restriction has not altered the basic quality of life for pedestrians on this street, which is atrocious. The council permits footway parking along both sides of the street in order to accommodate those residents who choose to own one or more cars but have nowhere to park them other than the road. Because cars parked on both sides of the street would block access for larger vehicles, the council has decided that pedestrians, not motorists, must pay the price. Pedestrians are funnelled into a metre-wide patch of footway on behalf of people like that person with a Lexus 4X4.

You cannot walk side by side with another person on a car-sick street like this. Here, a 20 mph zone has done nothing whatever for pedestrians, apart from reduce their chance of injury if hit when crossing the road. This street is in a ward where the last census indicated that 49 per cent of households did not own a car.

Looking around the streets of Waltham Forest which are in 20 mph zones I see no evidence for the claim that the car is no longer king. And this particular street is no more pleasant for cycling on than for walking on: 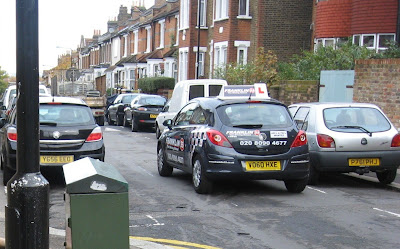 As far as cycling is concerned:

Rod King of Warrington Cycle Campaign emphasised that although only 4% of UK road deaths are cyclists, showing us that cycling is, statistically, a relatively safe activity, still the fear of accidents (real or perceived) deters many, many people from cycling on the UK roads. Despite all the campaigning, despite the infrastructure, cycling levels nationally are falling. Why? Rod then went on to make the point that speed reduction, and that alone, is the ONLY thing that will redress the balance & give people confidence to cycle on the roads. He was shockingly convincing.

To convince me, Rod King would have to show a correlation between the introduction of 20 mph zones and a measured, consistent and significant rise in cycling in those zones. As far as I am aware there is no such evidence.

The CTC argues that

A survey of European best practice by the Commission for Integrated Transport found that extensive 20mph limits have benefits beyond road safety. It found that towns and cities with extensive 20mph or 30kmh zones (typically covering 65-85% of the road network) were strongly linked with higher levels of walking, cycling and public transport (with all their associated health, environmental and social benefits) and with economic vitality.

But of course European best practice for cycling is based around the principle of segregating cyclists from motor vehicles. Cherry-picking data from non-vehicular-cycling cultures which are totally different to Britain is pointless.

In fact when the DfT did a survey of one pioneering 20 mph zone it concluded that The zone appears to have had little effect on cycling.

If what Rod King says is true then the one city where a 20 mph zone ought to have produced a cycling revolution is Portsmouth, since Portsmouth was the first city in the UK to adopt a 20mph limit across most of its street network, leading the way for other towns and cities across the country.

Portsmouth has always been the perfect place for cyclists. The City mainly lies on the very flat island of Portsea and we have one of the best climates in Britain. Temperatures and sunshine hours are consistently higher than in more northern parts of the country and rainfall is lower than the national average. We are the second most densely populated area in the whole of Europe. So everywhere is easy to get to on a bike and cycling is a pleasure in the city. Portsmouth has a relatively high proportion of households with no access to a car.

It is also worth pointing out that, as in central London, Portsmouth has some very wide roads, and cycling on wide roads can often feel a lot less threatening than on narrow roads.

At the start of this century cycling levels in Portsmouth were higher than in many other cities in the UK, with a 2001 modal share of 5.35% and a commuter modal share of 7.1%. At that time the city council set itself the target

The council later drastically scaled down its cycling targets, instead aiming

The trend nationally is downward so ‘no decline’ can be considered an achievement.

Not exactly a cycling revolution, then.

In fact Portsmouth is just the kind of city which should have a massive modal share for cycling on a par with the most successful Dutch towns and cities. But achieving that would require fundamental restrictions on car use and the appropriate cycling infrastructure being put into place.

The core problem in Portsmouth, as everywhere else in the UK, is that the council combines risibly minimalist secondary infrastructure (it is very proud of six sheltered cycle stands at Cosham station) with what are fundamentally vehicular cycling strategies, not ones based on those which have worked in the Netherlands and Denmark. Or to put it another way, Portsmouth has a sub-standard predominantly vehicular cycling infrastructure while being at the same time a very good city for drivers. Personally I feel far more relaxed driving around Portsmouth than I ever do in London. Portsmouth is also brilliant for driving off to places like Southampton or Brighton.

The reason why Portsmouth’s 20 mph zone is unlikely to result in people taking up cycling is inadvertently revealed here:

Cllr Alex Bentley, Executive Member for Environment and Transportation when the scheme was launched, said: "On most of our residential roads, it's not safe or appropriate to drive at more than 20mph, because they're narrow and lined with parked cars.

Conditions like that are not cycling friendly and no one wants to cycle on them apart from hardcore cyclists.

As far as Portsmouth is concerned, let me leave the last word to one local resisdent:

A mainly flat city, Portsmouth is ideal for cycling and there are many designated cycle paths and routes. As with many other cities, these can be disjointed and, if you're not from these parts, you may have difficulty in navigating them! Our highways are littered with parked cars which spend most of their time doing nothing - what a waste of a resource - and the council is reviewing all double-yellow lines with a view to creating yet more on-street parking. Taxis and private hire cars are plentiful and efficient although some of their drivers are blissfully unaware of speed limits. Change here is very slow and whilst the decision-makers remain married to their cars this pace is likely to continue.

Residential areas which are “narrow and lined with parked cars” greatly resemble 20 mph zones in a failed cycling borough like Waltham Forest.

Cycling on narrow roads lined with parked cars simply isn’t a pleasant experience when you come into conflict with motorists who don’t cycle. Nor are you ever going to get families cycling when everyone has to cycle in a single file in a narrow gap between parked vehicles (with the ever-present threat of ‘dooring’) and moving motor vehicles which pass just inches away.

20 mph zones reduce casualty rates as a result of lower vehicle speeds, but as campaigners concede

Killed and seriously Injured (KSI’s) statistics may not be a good indicator of road danger.

Exactly. And perceptions of road danger among non-cyclists, I would argue, are unlikely to be altered simply by lower vehicle speeds. Indeed, a 20 mph zone may actually worsen conditions for cyclists, since the Department for Transport's recommended measures

Dragon teeth (to create a visual impression of narrowing), or physical road narrowing.

Here is just such a ‘physical road narrowing’ on a street within an area-wide 20 mph zone in Waltham Forest: 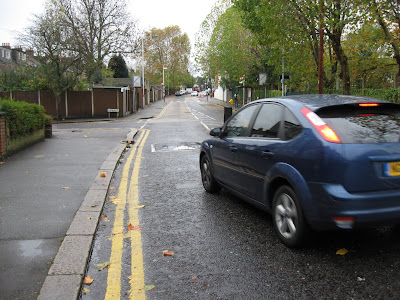 The pinch point (a traffic island in the middle of the road) forces drivers into conflict with cyclists, and the situation is made worse by rubber speed cushions which drivers swerve to pass over without touching the cushion with their wheels. This can be very intimidating and frightening for a cyclist. And many drivers will overtake a cyclist at pinch points like these and try to force their way through first. Being bullied by a car driver doing 15 mph is still being bullied, even if you are unlikely to die as a result of any collision.

The situation is no better on 20 mph zone roads which are wider, like the one shown below. Here, vehicle speeds are very low but this does not make for an attractive cycling environment. The priority on this road, which is effectively four lanes wide, is car parking, not cycling. If you ever want to get mass cycling at a site like this you have to get rid of the car parking and reallocate road space for segregated cycle paths. The primary problem isn’t vehicle speeds, the primary problem is the sheer saturation level of motor vehicles and their proximity to the cyclist.

we know that in European cities the 30kph limit is the foundation of their cycling and walking strategies.

20 is already Plenty for the citizens of Portsmouth, and Oxford, and Islington, and Newcastle, and Wirral, and Leicester, and Hilden, and Copenhagen, and Brussels, and Amsterdam, and Rotterdam and Ghent and Graz, and so many more.

He’s wrong. The foundation of successful cycling in the Netherlands is the separation of cyclists from motor vehicles.

There are also enormous variations in cycling's modal share in the cities which Rod King lists, and there is not a scrap of evidence that speed reduction is the key to those differences. Rotterdam, for example, has the lowest cycling rate of any city in the Netherlands. Even in the world's most successful cycling country there are significant variations, with cycling infrastructure and transport planning designed to inconvenience motorists the key factors. Speed restriction is NOT the founding principle of Dutch cycling strategy, and 20 mph zones in Britain will never be the catalyst for a new mass cycling culture. What non-cyclist is going to want to take up cycling in a 20 mph zone like the one shown below? 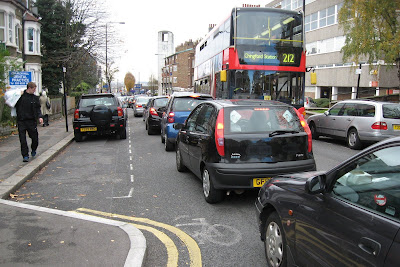