Leyton Green Road, aka the B159. The pavement and the carriageway have both been resurfaced, with the cycle lane re-marked. Funnily enough, during the roadworks (below) was the only time I have ever been able to cycle along this road from High Road Leyton to Lea Bridge Road without having to swing out round parked cars. The stretch of road where the yellow cones are is normally filled with half a dozen parked cars, which presumably belong to the residents of the short terrace of houses on the left. 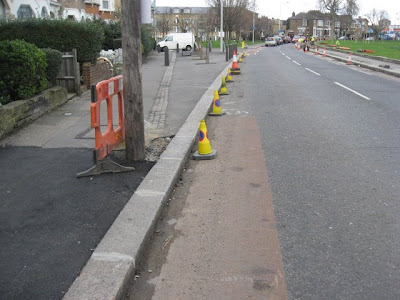 Leyton Green Road is relatively narrow and very busy. It is used by lots of double-decker buses. But on both sides of the road there are sections where the cycle lane vanishes under parked cars. Compare the photo above with the one below (roughly the same spot, note the telegraph pole). Car parking takes priority over the safety and convenience of cyclists. The result is that cyclists get caught up in the jams when the traffic backs up at the lights, as in the photo below.

Parked cars also force other vehicles out into the middle of the road, obliging oncoming traffic to move into the cycle lane on that side. The continuous cycle lanes are entirely meaningless because there are ALWAYS some vehicles parked, quite lawfully, over sections of them. And this takes us to the heart of the hypocrisy involved in pretending that London can be made into a first-class cycling city. To do so would involve conflict with car owners and their 'needs'. On Leyton Green Road, as at numerous other locations, the council is not prepared to put cyclists before car parking. Storing a stationary one-ton bubble of metal on the highway gets priority over those who choose to cycle. Unfortunately numerous bodies which claim to be promoting cycling prefer to pretend that such conflicts don't exist and evade the reality that such decision-making constantly sends out the message that cycling is an inferior means of transport. 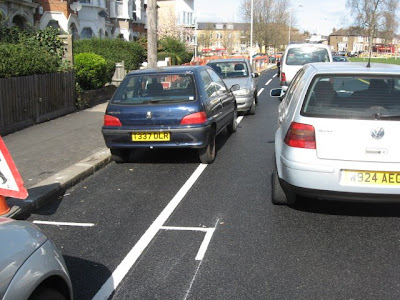 Posted by freewheeler at 08:12