Under a picture of a cycle lane leading up to an Advanced Stop Line the London Cycling Campaign asserts:

To encourage more people to choose to use their bicycles, the roads must be made more cycle-friendly so the risk, and the perception of risk, are both significantly reduced.

And now here's a picture I took yesterday of a local road which meets LCC's criterion of being 'cycle-friendly'. Yes, it's The Bell corner again (where the A503 crosses the A112). 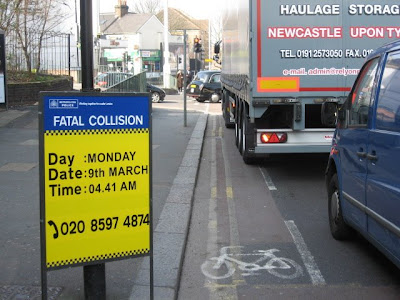 The lights are at red. That black cab beyond the HGV, incidentally, has stopped on a KEEP CLEAR marking.

By 2003 almost all main roads in the core of the borough had cycle lanes (20 miles) and a substantial network of quiet routes (also 20 miles) using residential roads and park land was also in place.

What all this evades is the width of those lanes, the condition they are in and the segregationist philosophy which underpins them. It also evades how drivers treat such facilities as do exist for cyclists, the reckless, hostile and aggressive attitudes which some drivers have towards cyclists, and the general disintegration of traffic law enforcement in London.

I know exactly how 'Buffalo' Bill Chidley felt when he wrote To make myself feel better, I cancelled my membership of the London Cycling Campaign. I should put a link to their page, but I’m not going to, because I think they suck.

The local branch of the LCC has steadfastly declined to link to this blog, in the shrewd belief that it will be of no interest to cyclists in Waltham Forest. I’ve always linked to them but my generosity has expired and I’ve now followed Buffalo Bill’s example.

And now consider this. The off-road cycle lane between Beresford Road E17 and Roberts Road: 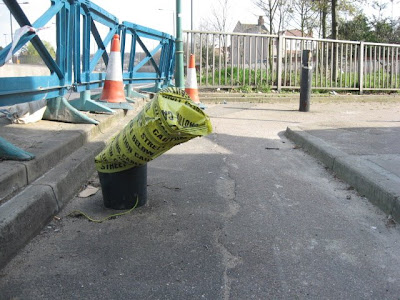 Last summer a driver who was coming down the slip road off the North Circular 'lost control' and slammed into the metal fencing at the side of the slip road, in the process demolishing the lighting column which had thoughtfully been rooted in the off-road cycle lane. Many months later the twisted stump of the lamp post remains, with a loose electrical wire drooping from it. This is adjacent to a sharp bend on a two-way cycle lane. The metal fencing has not been replaced, so plastic temporary fencing and a couple of traffic cones are all that separate cyclists from motor traffic.

This is a classic instance of what Chris Hutt would describe as neglected by the authorities, off their radar.
Posted by freewheeler at 08:23