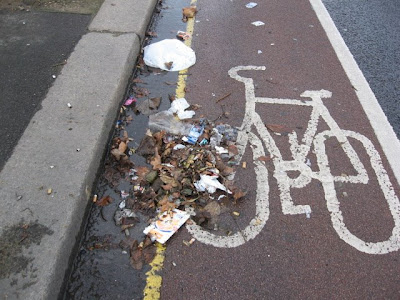 The cycle lane, Forest Road, just after the junction with Wood Street, heading towards the Town Hall.

For a long time now water has been pouring out from the steps leading to the block of flats (the one where someone was murdered in the stairwell a while back). When temperatures drop below zero the pavement turns to ice. And the water then gushes into the cycle lane, taking with it the local litter...

I guess it's Thames Water, not bothering to maintain its leaky pipes. Incredibly, water is still dripping inside Walthamstow tube station, while Thames Water procrastinates.

What I don't know is what powers the Council has to compel Thames Water to take action to stop water pouring out over pavements and roads. If it has any such powers it doesn't appear to be using them.
Posted by freewheeler at 20:06