An ancient folk custom which all contractors obey is to leave behind one section of plastic fencing and two traffic cones when the streetworks are finished.

Take this purple plastic fencing, for example. It was left behind, and ended up in the cycle lane on Hoe Street at the junction with Church Hill. I blogged about it on 21 January. Two months later this crap is still clogging up the street and absolutely no one from the local council has noticed, because no one is employed to notice. Cyclists and pedestrians inhabit a third-rate environment, off the radar. All that's changed in two months is that this purple panel is now an obstruction for pedestrians instead of cyclists. 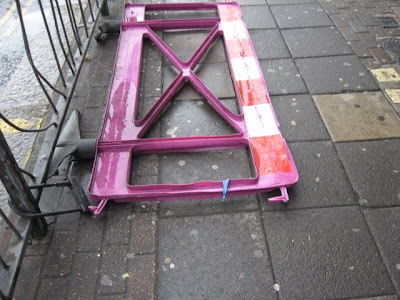 Posted by freewheeler at 07:46