Keeps the rain off better than a cycle helmet 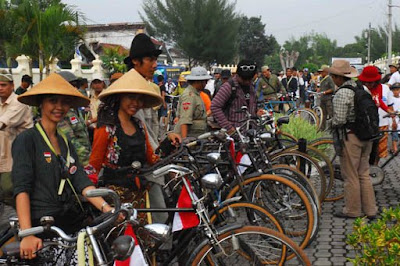 You’d never get this in Britain. Yes, thousands cycle to celebrate the heroic national resistance against the Dutch occupation

Most people probably don’t know that a Dutch army once landed in England, marched on London, and carried out a coup. But, er, there was no heroic resistance. The national response was more a case of ‘I think I’ll stay at home today. I’d love to combat the foreign invader but unfortunately I'm feeling a bit under the weather.’

Apparently the Dutch are responsible for introducing gin into Britain. And as the Daily Mail reminds us, The social consequences were catastrophic. Although they did inspire some rather fine engravings by Hogarth.
Posted by freewheeler at 07:42