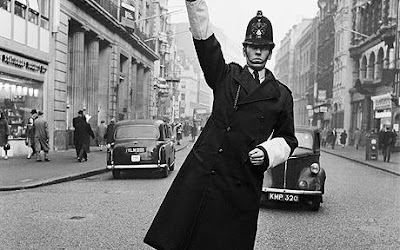 Day after day the papers have been recycling lurid press releases from Scotland Yard, relating to this week's protests centered around the G20 summit in London. Here's the latest.

The Met warned the prospect of violent clashes had lured anarchists from the Poll Tax riots of 1990 out of retirement. Groups including Class War, the Wombles and the Whitechapel Anarchist Group have secretly reformed to plot carnage on London's streets this week.

We get this kind of over-heated rubbish every year prior to the Climate Change camp. Maybe someone at Scotland Yard should do a history degree. Riots are not pre-planned. Explosions of mass anger are not orchestrated by individuals or fringe groups. And I am sceptical that anything much will happen this week, or indeed that many people will turn up. Most people will be at work on Wednesday and Thursday, and I rather doubt that those unfortunates who lost their jobs at local branches of Woolworths will be heading for the City with rocks in their pockets. The one group that seems to be itching for a bit of action is... the Met. As I shan't be there I know I can rely on bloggers to tell me what really went on.

What I find interesting is the reference to 'carnage on London's streets'. That certainly exists and the Met couldn't really give a toss about it.

It seems to me unlikely that anything that happens in London this week is going to match that level of violence. The major form of violence and anti-social behaviour in London is committed by drivers - a social group who have long enjoyed the Met's favours. The Met is car supremacist to its core, from the Commissioner down. Hardly surprising that the Met incubated Mike Todd, who took his prejudices to Manchester and, I would argue, made it a more dangerous place.

The Met, as RoadPeace has long complained, seriously under-resources investigations into road deaths, when compared to murder.

The Met has always been contemptuous of the interests of pedestrians and cyclists in London and reluctant to enforce traffic law which protects vulnerable road users.

The Met wasted vast amounts of public money in its belligerent and futile attempt to have the monthly Critical Mass made illegal and suppress it.

The Met has a blanket policy of not enforcing Advanced Stop Lines for cyclists, because this might slow down motor traffic.

It has long treated atrocious driving by police drivers with extreme leniency.

The failure of policing in London can be seen from the epidemic levels of criminals manipulating dangerous machinery while chatting into a handheld mobile phone. The Met could catch thousands of offenders every day with very little effort or resources. But it has no real interest in doing so.

And now evidence from inside the service indicates that rape is treated less seriously than damage to or theft of motor vehicles:

Women are right to be concerned: car crime has been treated as a higher priority than their safety.

Dave Hill thinks its time for some engagement with communities the police haven't always listened to well enough.

He is thinking of ethnic communities, but the rot in the Met surely goes much wider than that. And the police, in London as elsewhere, are alienating a swathe of the public by their half-witted mis-use of anti-terror laws.
Posted by freewheeler at 07:36