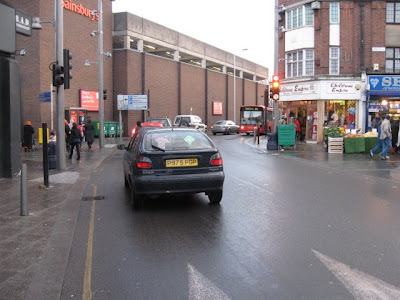 (Above) Willow Walk E17. Traffic backed up across the speed table as the lights change.

(Below) The same phenomenon, seen from the High Street. 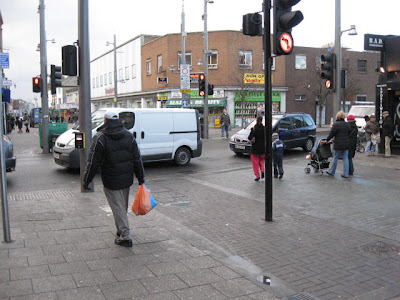 Although the Council is always solemnly urging residents to walk more and drive less, it institutionally discriminates against walking. A good example of this is where Walthamstow High Street is intersected, roughly half way down, by Willow Walk.

Even though the High Street has high pedestrian flows, especially on market days, and particularly so on Saturdays, motor traffic has priority. Pedestrians have 5 seconds to get across the road. They then have to wait for motor traffic, which is allocated between 45-60 seconds.

This crossing point is shambolic in two ways. Firstly, the speed table has no hatched yellow markings to deter drivers from stopping on the table by making it an offence for which they can get a penalty ticket. What happens with monotonous regularity is that traffic backs up from the lights at the junction with Selborne Road. Drivers crawl over the speed table at green, then the lights change, and they are stuck there. Scores of pedestrians then have to file through the gaps between vehicles to cross the road in the five seconds allocated to them. By the time the lights go back to green for vehicles, pedestrians are still in the road.

As soon as the speed table was installed I phoned the highway engineering department and described the problem. I was told that the phasing of the lights at the junction with Selborne Road was about to be altered to prevent this happening. Needless to say this assurance proved completely worthless. The phasing may have been altered but it did nothing to prevent backing-up.

The second problem is the risibly short time allocated to pedestrians to cross, far less than is allocated to motor vehicles. If Boris Johnson's intention of trimming up to six seconds off 'green man' crossing times is to be applied here, where the crossing time is already only five seconds, the results should be... interesting.

This second problem was made worse during 2008. Until last year, this was an 'ahead only' junction for vehicles coming down the High Street. But then, without warning, a right turn phase was introduced for vehicles (with left-turning remaining banned). Since vehicles turning right cut across pedestrian flow, the council significantly reduced the crossing time for pedestrians.

In the photograph below the lights have turned to green for pedestrians, but the shoppers on the right don't realise it because of the red light for (non-existent) right-turning drivers in the High Street. And the blue car waiting on the speed table, with a Kier van just behind it, obstructs the pedestrian crossing point for those women with buggies. 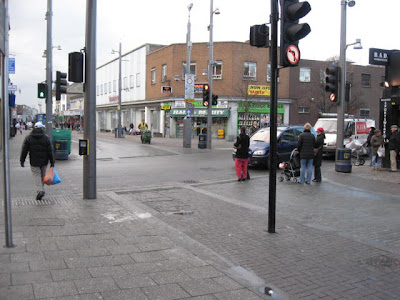 This innovation was introduced without consultation or notice, either by officers on their own initiative, or was rubber-stamped by Bob Belam. It was a stupid decision, because Tuesdays-Saturdays 10 am - 4 pm, the High Street is a pedestrian zone. During this period pedestrians are held back by a red light to allow non-existent vehicles to turn right. The tiny number of drivers seeking to turn right here outside pedestrian zone hours have been allocated the same amount of green light - around five seconds - as the tens of thousands of pedestrians who cross here every week.

The result is total confusion. By the time the 'green man' has lit up, two to three seconds have elapsed before pedestrians realise. Long before they get to the other side the lights have changed again, as shown in the photograph below.

If this council was remotely serious about the needs and safety of pedestrians in the High Street it would introduce yellow hatched 'no waiting' markings on the speed table and get rid of the right-turn phase for vehicles, which would automatically double the crossing time for pedestrians. But I'm not holding my breath. 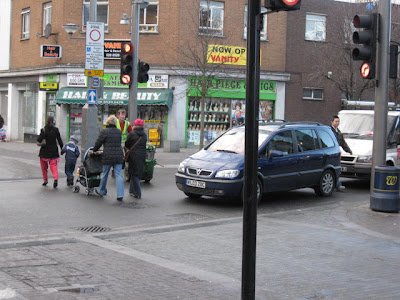