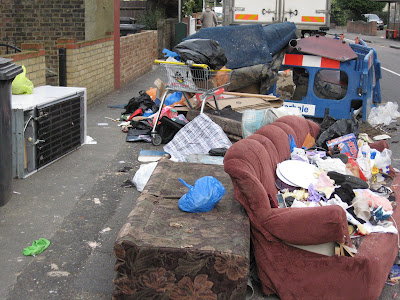 Cann Hall Road E11 - a perfect example of what is wrong with walking and cycling policy in this Borough, and why the motorist is still the privileged number one figure in the transport hierarchy.

Let's begin with the mountain of squalor by the junction with Leytonstone Road. 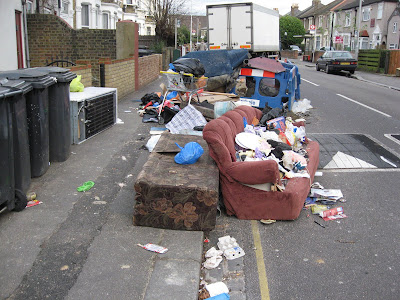 Wheely bins kept permanently on the footway (they shouldn't be but they are, all over the Borough). Flytipping which hasn't been promptly dealt with. And notice the speed cushions: the classically stupid 'three in a row' design which encourages drivers to steer their vehicles into the centre of the carriageway. This is not traffic calming but traffic agitation, and it actually worsens conditions for cycling, because it encourages drivers in the opposite carriageway to move over on to the cyclist's side of the road. Madness. These rubber speed cushions need tearing up and some better alternative found for slowing traffic.

Why speed cushions? Well, it's a long straight road and the Council decided to encourage speeding by moving parked cars on to the pavement. As you can see in the photo below this was done without any consideration of the location of street furniture or the requirements of footway users with a mobility handicap.

a blind person using a long cane or with an assistance dog needs 1100mm. A visually impaired person who is being guided needs a width of 1200mm. A wheelchair user and an ambulant person side-by-side need 1500mm width. Unobstructed height above a pedestrian way is also important, especially for visually impaired people. Generally, this should be a minimum of 2300mm

Well, the blind, the visually impaired and wheelchair users had better avoid Cann Hall Road, because the London Borough of Waltham Forest believes that pavements are for car parking, not for them - as you can see from the photo below, where this legally parked car leaves less than a metre space. 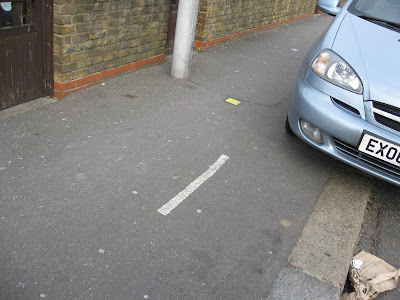 As for cyclists... Cann Hall Road is a terrifying road for cycling on. These small cheap rubber speed cushions don't slow the determined speeder and the chicanes create dangerous pinch points which bring cyclists into head-on conflict with vehicles approaching on the cyclist's side of the road. (It would be very interesting to have a cycling count taken on this road.)

Now it's true that the pinch points have side access lanes for cyclists. However, to be functional they need at least five metres of unoccupied carriageway either side, protected by 'no waiting at any time' double yellow lines. Whoever designed these cycle facilities for LBWF had their work cancelled by someone's else's decision to prioritise pavement parking. Try cycling through the side access lane here, for example. You can just do it because the 4X4 hasn't parked to the end of the footway exemption markings. But would you want to? As you emerge and pull out to pass the 4X4 you risk being hit by a vehicle speeding through the pinch point. (Drivers accelerate to get through them in order to beat oncoming vehicles.) 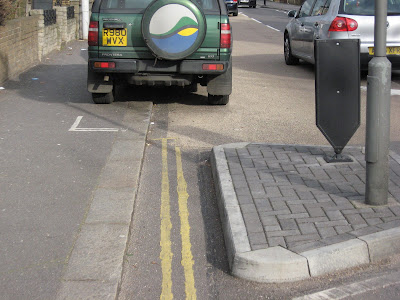 Elsewhere (see below) it's a different story. You simply can't access the cycle facility even if you wanted to.

And that's Cann Hall Road - where the parked 4X4 and the speeding driver take priority over the pedestrian, the fooway user with a mobility handicap, and the cyclist. 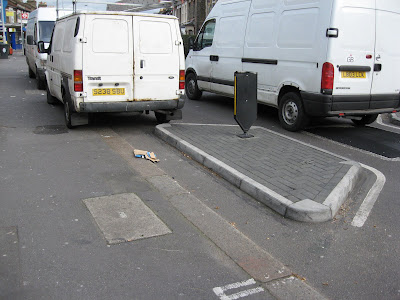 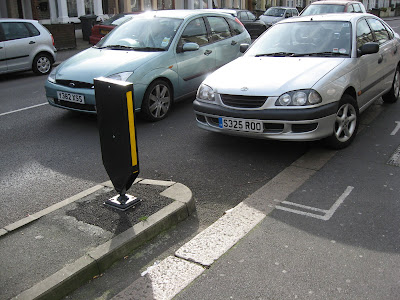 Posted by freewheeler at 07:16