Crash at the Crooked Billet

A pensioner is being treated for serious head injuries after the car she was travelling in hit a lamppost on Saturday. The 67-year-old passenger had to be cut out of the car by fire-fighters after the Vauxhall Astra crashed at the Billet Roundabout, on the Chingford/Walthamstow border, by the exit slip road of the A406.

This news story appeared on the website of the local Waltham Forest Guardian, but the link has now disappeared. I suppose it will be in covered in more detail in Thursday's issue. I don't know what the statistics are but there seem to be crashes at the Crooked Billet on a fairly regular basis. 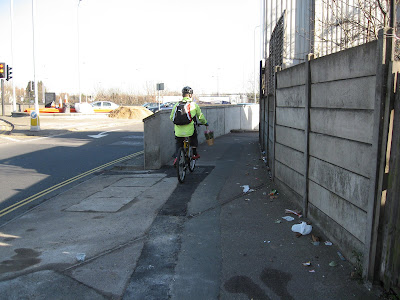 The problem is simple. Just before the exit there is a 'shared use' walking and cycling sign for pedestrians and cyclists exiting to Billet Road. But the sign is either wrong or has been twisted round by vandals because the cycle lane ends by the sign. The faded END markings are easily missed. As you continue you emerge here (below), where a dropped kerb invites cyclists to enter the carriageway. The problem is (i) traffic enters Billet Road here at speed (ii) the drivers' view of cyclists is obscured by the wall. There is nothing to indicate to a driver that a cyclist might be entering the carriageway at this point. (iii) the white arrow in the carriageway advises drivers to move in to the kerb, directing them to the very place where cyclists enter the carriageway (iv) there is no cycle lane.

Any cyclist joining the road here needs to exercise extreme caution, as even if you enter the carriageway safely you run the risk of being hit from behind by some lunatic speeding round the bend. 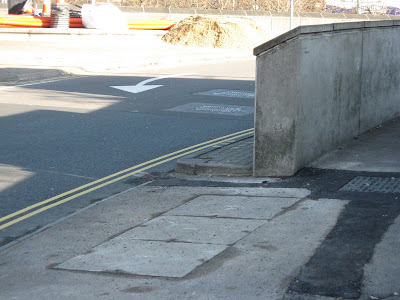 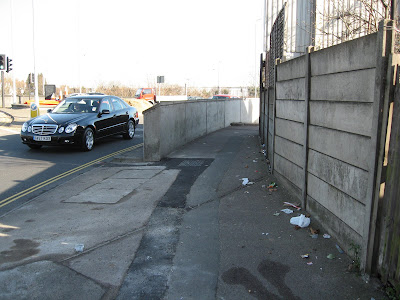 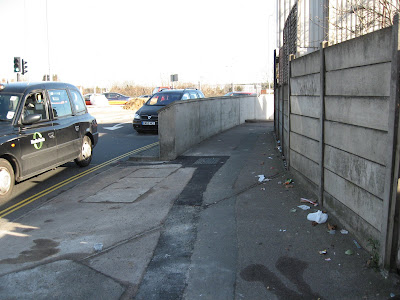 Posted by freewheeler at 13:20