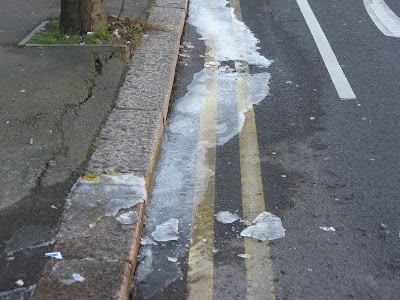 By yesterday afternoon the ice which originally extended the full width of the cycle lane on Forest Road E17 at the junction with Hoe Street had half melted.

All over the Borough water is leaking out of pavements and bubbling up from Thames Water hydrants. One of the reasons seems to be that instead of fixing leaks the company finds it more economical to simply increase the water pressure. As a highway authority the London Borough of Waltham Forest is not unduly concerned about this. I know for a fact that hazardous sites which are permanently under water have been reported to the Council, which has failed to act. 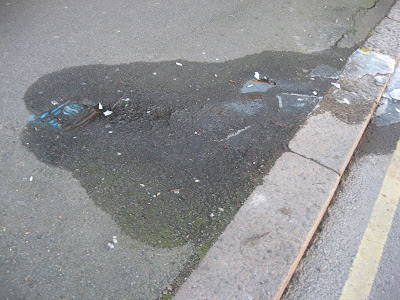 This (above) is the cause of this (below). 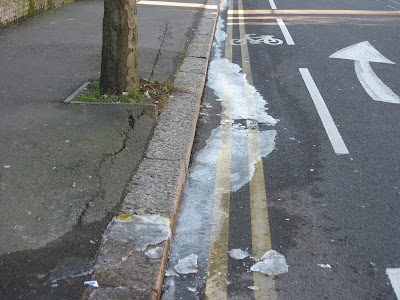 Even worse is the situation on Tower Hamlets Road E17, where water which permanently leaks across the road surface, turns into a broad sheet of ice when temperatures plunge below zero. And it's on a hill. If you come crashing off your bike here then it would be a good idea to seek legal advice, as it seems to me that Thames Water and the London Borough of Waltham Forest are both guilty of negligence for failing to deal with a permanent water leak which transforms a large section of road surface into sheet ice whenever the temperature drops below freezing. 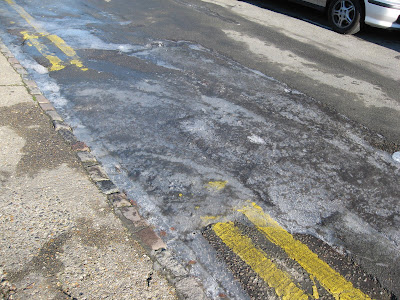 Posted by freewheeler at 08:38